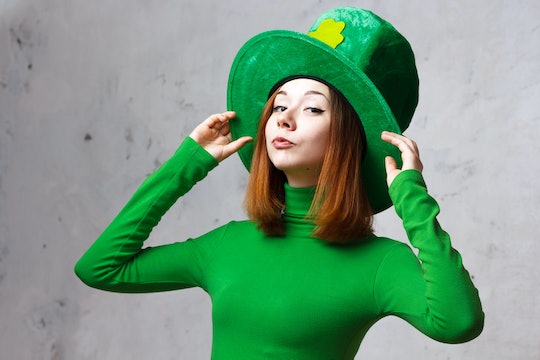 Here's The History Behind Why Everyone Wears Green On St. Patrick's Day

I live in New York City, home to the world's largest St. Patrick's Day celebration and parade. Every year, our cities turn green with the color of the holiday. Green flags are erected along the parade route, green beer flows from the taps of the local pubs, and even my priest at St. Patrick's Cathedral dons fancy green vestments on the holiday. But, why do we wear green on St. Patrick's Day? Is it a celebration of Irish heritage? Is it because we want to match the shamrocks we wear? It turns out, there's more to it than you might think.

The reason revelers wear green on the holiday is a grand story filled with intrigue, invaders, celebration, and religious freedom. According to TIME magazine, it all started with a flag. In the 17th century, Catholic landowners were displaced by the Protestant English Crown. This did not settle well with the Bishops, who led a rebellion against the usurping Brits to gain back the rights to their land. They carried a large, green flag into battle as a symbol of the band of men from Kilkenny who charged ahead, seeking recompense for their displacement. Sadly, though, they were defeated by Oliver Cromwell.

The flag was thought to be green because the rebellion was led by Catholic Bishops who were representing not only the sovereignty of their land, but who were also serving as protectors of their faith.

The patron saint of Ireland is St. Patrick, who was known to use the three-leaved shamrock as a means of representing the holy trinity of Father, Son, and Holy Spirit, according to CatholicHotdish.com. The vibrant green of the shamrock is still the preferred color used to celebrate the holiday and the shade that also festoons St. Patrick's Cathedral and papal and priestly vestments. Also, it's just a really easy color to dye light beer. (Three drops green and one drop of blue for a pitcher of ale. You're welcome.)

Fun aside: St. Patrick wasn't even Irish, according to Catholic.org. He was born in Roman-ruled Britain in the fourth century and was captured as a child by Irish raiders who then brought him back with them to Ireland. Oh the irony. Years later, he made his way back to Ireland after purporting to have had a vision calling him to missionary work on the small, green island. He eventually led the charge to convert the land's druids to Catholicism, and would end up claiming the land and building the very churches that the rebellion would fight over 1300 years later. He died on 17 March, which is why we celebrate his holiday on that date.

Why do we wear green on St. Patrick's Day in the United States if it's an Irish holiday? Here's the thing — because of the size of the Irish diaspora in the United States, we actually have about three times as many Irish people here than there are in Ireland, according to the Washington Post, and because we're American, we made the holiday much more of a spectacle than it was traditionally in the home country. (As we are wont to do.)

If there's a way we can incorporate costumes, a parade, and a huge amount of beer in a holiday, we're going to do it. While the origins of green may hearken back to time when faith and a sense of justice caused men to settle scores on the battlefield, in the United States, wearing green on St Patrick's day is akin to wearing a sports jersey or ugly Christmas sweater. It's a fun, outward signal to others that you're celebrating with them and encouraging them to celebrate with you. As for the green beer? Well, it's just more fun that way.