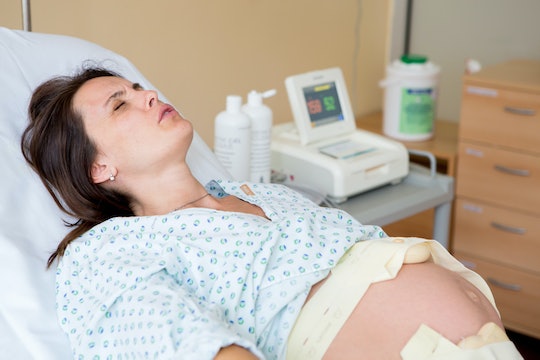 Childbirth is perhaps quite literally the most natural thing in the world, yet the mechanics of it can sure feel complex. Laboring through contractions is no walk in the park to say the least, but there's really no wrong way to do it; only ways that work better or worse according to the preference of any given woman. The pushing phase, however, is a little more technical. Why do you only push during contractions? What happens if you were to push at the wrong time?

Dr. Yvonne Bohn, an OB-GYN at Providence Saint John’s Health Center in Santa Monica, says it's a matter of working with the body's physiology to conserve the woman's energy, which is naturally declining by this point in labor. "Pushing out a baby takes an incredible amount of effort," Bohn tells Romper in an interview. "By pushing with the contractions, the woman uses the force that the uterus is generating in addition to her own efforts of pushing, which makes it easier. Maternal effort is not enough to push a baby out with out contractions."

Certified Nurse Midwife Amy Romano of Baby+Co. explains that as a contraction builds, the uterine muscle moves the baby's head down into the lower pelvis and vagina.

According to Romano, during a contraction stretch receptors set off a hormonal signal that results in the spontaneous urge a woman feels to bear down, or push. She explains, "Most women feel a strong urge to bear down as a contraction begins and strengthens. The urge typically lets up as the contraction fades and goes away completely between contractions. Especially in an unmedicated labor, this involuntary urge is very strong and instinctual and simply following this urge (with some encouragement and positive feedback from their birth team) is enough to push the baby out."

Romano, like most midwives, believes that letting a woman follow her instincts when its time to push is more supportive and effective than giving her strict instructions on when to do so. The uterus is already working with the rest of the body to get the baby out, and women who have not had an epidural will instinctively know when the time comes to push.

"Unlike the 'hold your breath and count to 10' style of coached pushing, instinctual pushing generally involves shorter periods of breath holding and more controlled exhaling, as the diaphragm muscle exerts pressure along with the uterine muscles to move the baby down and open up the pelvis for birth," she explains.

Are there times when even an unmedicated woman might need to be coached about when to push? Romano says it can be helpful to prevent the tearing that most women seek to avoid. "Sometimes, midwives will use gentle guidance to encourage the woman to push between contractions at the very end, as the baby is coming out. This approach has been shown to reduce the likelihood of vaginal and perineal tears."

I myself am by no means a stranger to the drama of the pushing phase. It took over three hours to get my first son out and one and a half with my second. So when it was time to push with my third baby, I was sure it would be an exhausting marathon. Imagine my surprise when he came flying out in about a minute while the midwife ran into the room to catch him! When it comes to pushing, you really never know what you're going to get, but working with your body instead of against it is the route you definitely want to take. So bring on those contractions and get that baby out.

More Like This
Can Dogs Sense Labor? 5 Signs Something Might Be Up
Mom Gives Birth To Record-Breaking 16-Pound Baby
OB-GYNs Explain The Connection Between Stress & Miscarriage
What Foods Fight Nausea During Pregnancy?
What Parents Are Talking About — Delivered Straight To Your Inbox