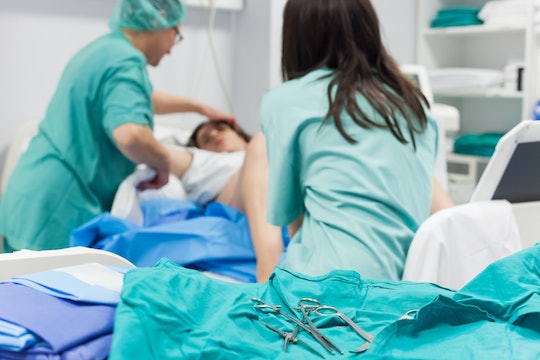 The Reason You Poop During Delivery

Aside from the fact that you'll be pushing an actual human out of your lady parts, many moms are terrified of the thought of pooping while giving birth. I remember having the same exact fear and wondering "if you can't control your bowel movement, what can you control." It's a strange thought, and one that many moms obsess about in the weeks before delivery and even while they're actually in labor. But why do you poop on the table during delivery in the first place? Knowing a little bit about the "why" behind uncontrollable bowel movements during labor can make the thought a little bit more bearable.

According to Parents, if you're having a vaginal birth — medicated or not — you can pretty much expect to poop during labor. It's just one of those things that you can't do much about. The reason it happens is pretty simple: the muscles you use to deliver your baby are the same ones you use when you have a bowel movement, according to What To Expect. While you're pushing with all of your strength to give birth, the extra pressure on your colon and intestines with the combination of your contracting muscles makes it pretty hard to avoid.

Additionally, The Bump pointed out that although pooping during labor is fairly common, some moms don't even notice that it happens and the nurses or doctor will simply wipe it away. They're so used to it happening that it won't be nearly as big of a deal as you're anticipating it to be.

The bottom line is that sh*t literally happens during labor, but it definitely shouldn't be high on your list of things to stress about. It's a natural response to what your body is doing — pushing incredibly hard — and it shouldn't keep you up at night.