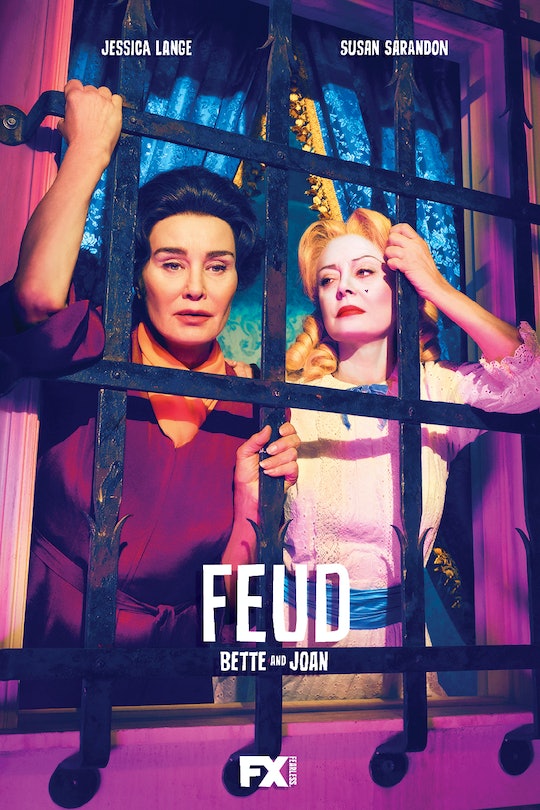 FX's Feud spent some of its first episode detailing the earliest days on the set of What Ever Happened to Baby Jane?, including the development of the main characters' signature looks. It used Blanche and Jane's distinct personal styles to further explore the rivalry between stars Joan Crawford and Bette Davis, as they both have very different approaches to their characters. Whereas it was an uphill struggle to get Crawford to give up her glamour to play a recluse, Davis was all about doing what was right for the character — even if she didn't look so pretty in the process. But why does Bette Davis wear so much makeup on Feud?

While on the show it could initially be seen as a dig to Crawford because of her penchant for wearing a lot of makeup and the fact that Davis was shown taking inspiration from an old wig of Crawford's, the real-life explanation is a bit more mundane. In real life, neither woman even knew Crawford had once worn the wig because it had been styled so differently that even Crawford herself did not recognize it. Jane's look was intentionally garish as an attempt to explain her character's origins and deteriorated mental state; Jane had once been a vaudeville star, so the look became a wildly exaggerated version of vaudeville stage makeup.

Stage makeup is usually much heavier than every day makeup, but Davis (who designed her own look for the film and did her own makeup) took it to the extreme. In Feud, Davis even mentioned adding a Clara Bow beauty mark while creating the look, indicating that some of her inspiration came from silent film as well, when a heavier makeup style was more in vogue. Inspiration also came from silent film stars like Mary Pickford, who was known for her childlike look, something that was an important facet of Jane's look as well because she had been famous as a child and this was an attempt to recapture her former glory.

In her memoir This 'N'That, Davis spoke about her intentions when creating Jane's look. "What I had in mind no professional makeup man would have dared to put on me," she said, adding:

One told me he was afraid that if he did what I wanted, he might never work again. Jane looked like many women one sees on Hollywood Boulevard. In fact author Henry Farrell patterned the character of Jane after these women. One would presume by the way they looked that they once were actresses, and were now unemployed. I felt Jane never washed her face, just added another layer of makeup each day.

Feud also showed Davis' debut of the look, which was met with thunderous applause. That was another thing dramatized for the purposes of the story, because in real life Davis' efforts were not so unanimously supported. It was an extreme look and many felt that it went too far. It took some time for the director and producers to come around to Davis' point of view, and of course she was right: Baby Jane's look was perfect for the character.