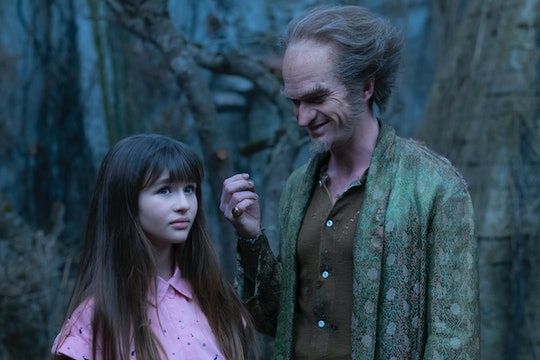 Count Olaf Hates The Baudelaires For A Reason

(Warning: this post contains unfortunate spoilers from Episode 8.) Netflix's A Series of Unfortunate Events follows the story of the three Baudelaire children, Violet, Klaus, and Sunny. Their lives first became unfortunate when their parents perished in a tragic house fire and they were placed in the care of their "closest" relative, Count Olaf. It quickly became obvious that all the Count was really interested in was getting his hands on the children's fortune, and actually didn't really like the children at all. So why does Count Olaf hate the Baudelaires on A Series of Unfortunate Events? The show hasn't explained it just yet, but the books hold the answer. Because while it wouldn't be all that surprising if Count Olaf just hated all kids, there is a specific reason why he has such a great distaste for the Baudelaires. Warning: book spoilers ahead!

The story of Count Olaf's past was still a bit sketchy in the books, but there were some things that were made quite certain. In the final book of the series, Count Olaf implied that the Baudelaire parents, the Snickets, and Dewey Denouement (another member of the secret society the Baudelaire parents were in), were involved in a sinister plot when they were all younger. Count Olaf also revealed that poison darts were used to kill his parents, making him an orphan. He believed that because Lemony Snicket's sister, Kit, smuggled poisoned darts to the Baudelaire parents at some point, that they were the ones responsible for his parents deaths. Hence, his hatred for the Baudelaire children. (Apparently, that makes them guilty by proxy?)

Count Olaf's theory was never confirmed in the books and honestly, it's hard to believe the Baudelaire parents would do such a thing, at least not without good reason. This feels a lot like that story about how the Baudelaire parents started the fire in Paltryville, however in the season finale it was revealed that the parents helped put out the fire, not start it, and assisted the survivors in getting back on their feet.

Although it's true that good people sometimes do bad things, this just doesn't seem right. It seems more likely that if the Baudelaire parents were involved with the killing of Count Olaf's parents, it was either accidental or more complicated than Count Olaf realized. Either way, the children certainly done deserve his continued torment.