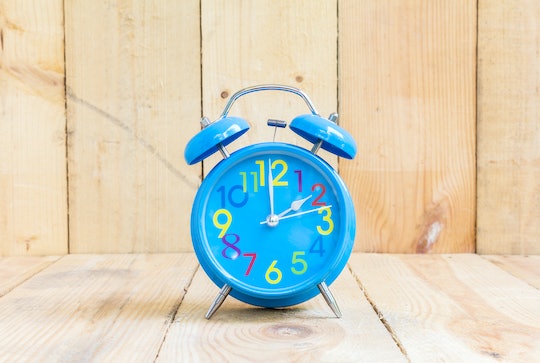 I don't know about you, but I loathe daylight saving time. Sure, "fall back" sounds great in theory — it's an extra hour of sleep after all — but if you're a parent, you likely understand the special sort of hell that happens when you adjust your children's sleeping schedules on a whim. This year, the dreaded "spring forward," when we lose an hour of sleep, happens on March 11 in the middle of the night. But why does daylight saving time happen at 2 a.m. anyway? Is it to get people out of the bar faster? Do the clocks start crowing at two?

The first experiment in changing the clocks happened during World War I, when the German government thought that the shift in daylight working hours might prove a significant energy savings. It was adapted later on by the United States government in 1918, who thought that the agricultural community would be better served by this shift in hours as well as a financial boon to towns and cities across the nation because of the possibility of significant fuel savings during a time of war, noted Spring Forward: The Annual Madness of Daylight Saving Time. According to LiveScience, 2 a.m. was not chosen arbitrarily. It's a period of the night that's usually the most quiet, and with little to no restaurant and bar activities to be interrupted. It also eliminates the chance of going back a day. For example, if we changed the clocks at midnight back to 11 p.m., that would make it yesterday again. (And unless Bill Murray and Andie MacDowell are involved, I want no part of this.)

If you couldn't tell by the opening paragraph, I am one of the people who wishes daylight saving time would die a quick death at the hands of the Congress who could crumple the Uniform Time Act in their hands if they so choose. The evidence that it works is weak at best, murky at worst. There are several books available on the subject that do nothing but pick apart the potential problems of turning back time, and none of them even scratch the surface for raging insomniacs like myself.

Daylight saving time happens at 2 a.m. for all the United States apart from our territories, Hawaii, and most of Arizona, in theory because it's the quietest time of night. Unless of course you have a baby, or you're living in New York City, where last call doesn't happen until 4 a.m.. Therefore, if you're falling back in November, the bars are open an extra hour, and if you're in the reverse in March, you lose an hour. Theoretically, November should even out the deficit incurred in profits in March, but it's still problematic.

Also, if you're like me, and you suffer from sleep-related anxiety, knowing your children will have problems sleeping for at least a week as they adjust might have you grabbing at your cup of sleepytime tea with a bit more strength than finesse.

Fortunately, over the course of 10 years as a mom, I've learned that if you change their wakeup period in increments of 15 minutes over four days, you can almost fix this in the fall when the change is trickier to deal with because your 7 a.m. baby instantly becomes your 6 a.m. baby. But, you have to also cut their naps by 15 minutes as well so that they're more likely to go down when you need them to. I know the wisdom is to never wake a baby, but do you really want a 6 a.m. infant to deal with when you first shower? Probably not. Thankfully, with the springing forward, you just have a few days of dealing with crabby kids, and not an early morning situation, but it's still a few days of dealing with whining and tantrums, and let's face it, no one likes those.

Buckle in moms, it's going to be a bumpy week next week.

More Like This
Up In The Middle Of The Night? We've Got Instagram Captions For That
56 Pumpkin Captions For All Of Your Most Gourd-geous Photos
Can Elderberry Help Prevent Illness In Kids? Doctors Weigh In
Where To Go Pumpkin Picking In Texas