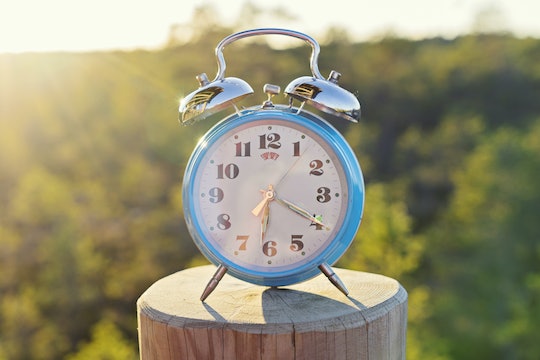 There's More Than One Argument For Why Daylight Saving Time Exists

Twice a year in the middle of the night we move our clocks backward or forward an hour. Mostly, we do it without questioning. As kids we're given the easy way to remember it, "spring forward" and "fall back," and told it had something to do with the farmers. The change officially occurs at 2 a.m. which either gives us an hour extra to party in the fall or an hour less to sleep in the spring. And while we're always reminded to change the clocks, we're not really given much info about why daylight saving time (DST) exists.

It appears that the biannual shift is less about the farmers and more about saving energy. Legend has it that Ben Franklin invented the whole concept of DST, according to the Philly Voice, but he actually suggested it facetiously. When Franklin was in Paris, the early morning sun waking him up and he made the comment that the French would save a lot of money by using less candles if they altered their clocks. He penned a satirical letter recommending the change. He was joking and the concept wasn't even considered.

During World War I, NPR reported that a DST was created to save energy, but the practice only lasted for a year. It came back for a brief moment during World War II. The idea sprung to life again in 1966 when Congress passed the Uniform Time Act, which picked dates for the start and finish of daylight saving time, but left it up to the states to decide if they wanted to implement it. It wasn't until the oil embargo of 1973 that the practice became federally funded. At this point it wasn't about saving a few French candles but about not having enough oil to heat homes or generate electricity. 100,000 barrels of oil a day were saved, according to NPR. This logic was used again a few years later when some school districts in colder regions starting giving week-long mid-February breaks.

There may be another, more capitalist-friendly reason why we observe DST. More sunlight meant more money. Author Michael Downing states in his book Spring Forward: The Annual Madness of Daylight Saving Time, that the extended daylight helped get people out of their houses and into the stores, according to Time. The Seattle Times reported that the candy lobby pushed for the end of DST to be shifted so that the kids could trick or treat longer. (Yes, there are people whose job it is to push for laws that encourage kids to eat more candy.) Golf clubs were similarly pleased because they could offer later tee times and other athletic facilities and sports clubs didn't have the expense of running their outdoor lights for that extended hour.

To the benefit of anyone trying to save energy or make more money, Congress passed the "Energy Act" in 2006 and shifted the dates a month earlier in the spring and a week later in the fall extend the DST window, as NPR stated. However, there's debate on whether the shift actually saved money. The New York Times reported that while the Department of Energy claimed that DST reduced electricity use by .5 percent, Matthew Kotchen, an economist at Yale, found that there was a 1 percent increase in electricity use due to increased air-conditioner use.

As to those farmers? Having the sun come up an hour later actually might have worked against them, as the dew evaporated off the hay an hour later and the cows weren't ready to be milked in time for the milk to be shipped, the History Channel reported. And then there are those states who don't buy into the concept of DST. Both Arizona and Hawaii don't see a need for it, according to Time.

As you gear up for DST, know that you will probably go to sleep that night and wake up the next morning to find that your phones are an hour ahead of your wall clocks. And then there's the parenting way of looking at it: twice a year it's either much easier or much harder to get your kids out of bed in the morning.

More Like This
The Best Couch Sex Positions
What Is RSV?
14 Top Gun Costumes For The Whole Family To Buy Or DIY
These 2022 Halloween Squishmallows Are So Cute, It’s Scary