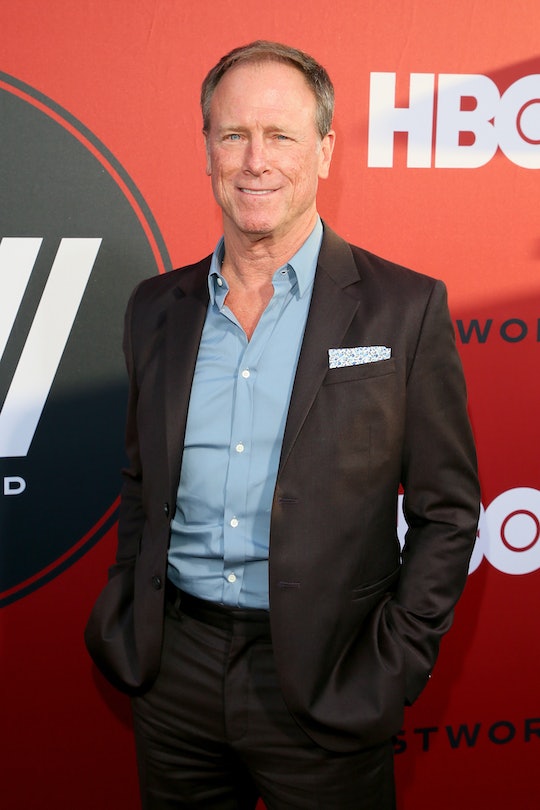 Peter Abernathy May Be The Most Important Host In 'Westworld'

In the first two episodes of Westworld's second season, Delos higher-up Charlotte Hale was desperate to find one particular host named Peter Abernathy, the man who had been programmed to be Dolores' father before a glitch sent him off to cold storage in Season 1. Charlotte was supposed to deliver him to corporate, but why does Delos want Peter Abernathy on Westworld?

It's not necessarily Peter they want, but the information he has. After being sent to storage, his mind was supposedly wiped, which Charlotte said made him "quite capacious" when it came to containing files. Think of him like a person crossed with an external hard drive. She was able to upload 35 years' worth of Robert Ford's developments into Peter's head to safeguard them in the event of Ford pulling some kind of stunt after his retirement. He did end up orchestrating a shocking final act, though it wasn't the one Charlotte had been anticipating.

Charlotte used writer Lee Sizemore to program Peter so that he would feel compelled to get on the train out of the park, where a Delos worker could pick him up and thus have access to everything Ford had ever created. Unfortunately for Charlotte, it didn't work out like that.

The robot rebellion stalled everything going on in Westworld and, as a result, Peter never actually made it to the train. Instead he was lost somewhere within the bounds of the park. Charlotte was pretty much trapped until she could locate him and get him out, thus guaranteeing that Delos would have everything they needed to know about Ford's work. As Charlotte said to Bernard in Episode 1, Peter was an "insurance policy" that protected Delos' investment.

There is a possibility that it isn't only Ford's files in Peter's head. Thirty-five years of Westworld data probably contains all kinds of useful information, especially now that it's clear Delos is also mining guest experiences and DNA. Perhaps all of those records are also being stored inside Peter's mind, which could explain why Delos is so intent upon getting control of him. He essentially holds the entire park's history in his head.

However, it wouldn't be Westworld without theories, and fans have come up with an alternate explanation for why Delos needs to acquire Peter no matter the cost — even putting their own employees in danger inside the park until they get him. Reddit user team93 speculated that Peter Abernathy was actually James Delos, the man who created the company and who is played actor Peter Mullan in flashbacks. They posited that after his death, James' consciousness was somehow implanted into Peter but the process went horribly wrong, causing Peter to malfunction and remain stuck in the park.

I guess Delos wanted his consciousness to be downloaded into a host body so he could live forever. William imprisons Peter/Delos in the park and they give him false memories that Dolores is his daughter. Meanwhile the moment he saw the picture of his real life daughter Juliet in Season 1 Ep 1 (also William's wife who committed suicide because she couldn't handle the "Man in Black" he had become) he snaped [sic] and that's were [sic] it all first started. And that's why it is so important to find Peter Abernathy now that he's gone.

There isn't very much evidence to support this theory, but Westworld has dealt in shocking twists and turns since its premiere. It's always possible that there is something else being stored inside Peter Abernathy. It might not be the consciousness of James Delos, but it could be something just as surprising.