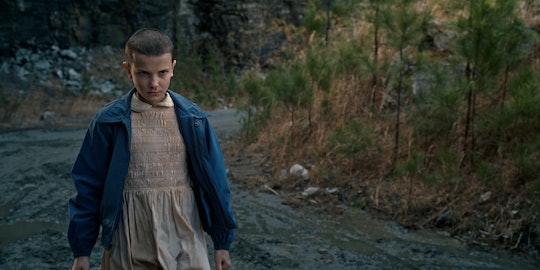 Why Does Eleven's Nose Bleed On 'Stranger Things'? Her Powers Physically Affect Her

(Warning: This post contains spoilers from Episodes 1-4 of Stranger Things.) Netflix's newest supernatural drama series Stranger Things was one of the most anticipated shows of the year prior to its release, and for good reason – the show is phenomenally engaging, with legit scares, a great mystery, and even better performances. Of course, Winona Ryder, Matthew Modine, and David Harbour are fantastic as per usual, but it's not often that you get a bunch of incredibly talented child actors, as well. Among the up-and-coming younger talent is Millie Bobby Brown, who stars as the mysterious Eleven. A young girl with shorn hair who barely speaks, Eleven (or "El," as the other kids call her) also frequently suffers from bloody noses throughout the season. But why does Eleven's nose bleed on Stranger Things? It might be a symptom of her powers.

The central mystery of the season is the disappearance of Will Byers, a young boy who vanishes (apparently into thin air) after being pursued by a monstrous creature in the shadows. Will's disappearance coincides with the appearance of Eleven, a strange near-mute child with an "11" tattoo. Almost immediately, it becomes abundantly clear that Eleven is far more than she appears.

On several occasions, Eleven exhibits apparent telekinetic powers. She stops a broken fan with her mind, slams a door and keeps it shut, crumples a Coke can, and, in an Episode 3 flashback, she even manages to use her abilities to kill two of the men helping keep her prisoner in the Department of Energy. One of the absolute best (and most cathartic) moments of the season is when Eleven uses her powers to make a school bully wet himself in front of the entire school after he insults Will during a memorial ceremony for the vanished boy and threatens Mike.

Via flashback sequences, we get a peek into El's past as an "inpatient" (of sorts) at the mysterious Department of Energy. We see her undergoing increasingly inhumane experimentation (with a slew of wires attached to her head), while the enigmatic Dr. Martin Brenner (Matthew Modine) watches over her. Bizarrely, he's even happy when she kills two of his men who attempt to lock her in a dark room – presumably because she exhibited her telekinetic powers when attacking them.

She also seems to have some sort of ability to "move" voices as well. In Episode 4, she manages to channel Will's voice through the school's audiovisual equipment and through Mike's radio, carrying his voice over from an apparent alternate dimension. In a flashback within the same episode, Dr. Brenner has El channel the voice of a man reading aloud down the hall through a speaker.

The bloody noses appear to be a symptom of "overexertion" – if her powers are linked to her brain, when she overextends herself while using them, her nose will bleed. When her powers really take a toll (as they do when she channels Will through the A/V equipment), she even experiences a brief sort of paralysis and the other kids need to cart her out of the school.

While the source and nature of Eleven's powers are shrouded in mystery, there's no doubt that she has telekinesis – and that her nosebleeds are linked to that ability.