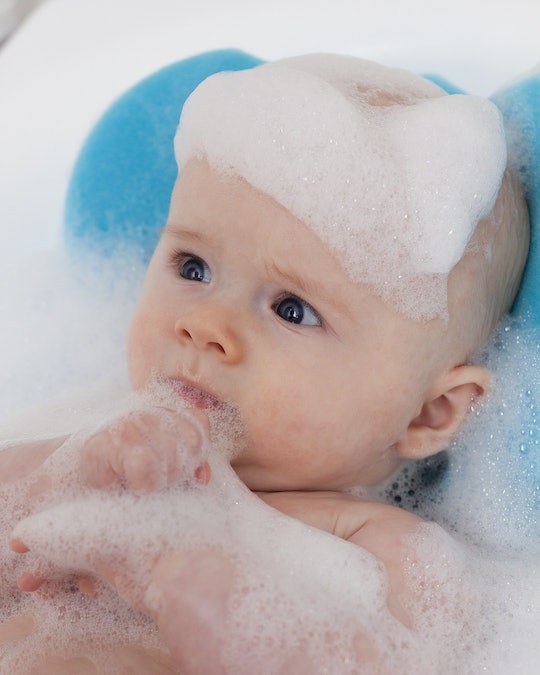 Why Does My Baby Cry During Baths?

Babies are known for getting some weird stuff all caked in their nooks and crannies. They just have so many rolls to hide things in, and everything they eat is liquid. Baths quickly become a nightly routine, but if they fuss, you may wonder, "why does my baby hate baths?" Because they may really, really need one.

I remember when my oldest was born, our home had a bathtub with the spout in a very weird spot. The spout was also old and had a tendency to alternately dribble and shoot water from its crappy chrome confines. As soon as he found out that the bathtub was, in fact, a sea monster intent on his doom, and couldn't even be controlled by the great superhero Baba, he thought that baths were the absolute worst, and the only possible response was to scream like a teenager who's had their iPhone revoked and pee at everyone.

But each case is individual, and you may be baffled by your child's detestation of the delight that is getting squeaky clean. If you're still wondering why your baby hates baths, don't worry — I spoke to an expert on the subject, and he's here to help.

Clinton Obwibwe, a pediatric home nurse in Brooklyn, tells Romper that there are tons of reasons babies may hate bath time. "Babies are like cute little barometers — incredibly sensitive to temperature and wind." He says that some little ones just don't like the feeling of being naked because they get so cold. Their skin is very attuned to being warm and cozy, whether it was in your womb, or swaddled and cradled in your arms. "It's like you're taking away the armor that protects them from the cold world, and then dunking them in ice cold reality. They're thinking 'I mean, how rude,'" Obwibwe says. He adds that it might be even simpler than that, noting that babies go through weird, unexpected fears all the time. They might start hating the ceiling fan they used to love, or their teddy bear, which was previously their BFFL, is now enemy number one.

Dr. Sears agreed and wrote for Parenting that kids just do this occasionally — they cycle in and out of phases wherein they are terrified of everyday activities. It wouldn't matter if the water was the perfect temperature, gently scented with lavender baby bath, and straight from the rivers of Mount Perfection, they'd still hate it, and that irrational fear is normal. (What about my irrational fear of white chocolate bunnies? That answer may never be found.)

Obwibwe tells Romper that the best thing you can do for your baby is to either delay or speed up the process. "Babies only need a bath maybe three days a week, and even then, it doesn't have to be a big process." He says to get them undressed beside the warm tub, bathe them quickly, wash their hair with a washcloth, squeezing a gentle stream over baby instead of pouring the water over their head, and then cradle them in a warm towel quickly. In between the big baths, a warm sponge bath should do the trick, and baby doesn't need to be in the tub or naked for that one to happen.

Until your child decides that you aren't trying to throw them out with the bathwater, bath times might be a pain, but hopefully, unlike my fear of white chocolate bunnies, it will pass, and you'll be searching "how to get baby to stop throwing bath toys at the dog" or something.