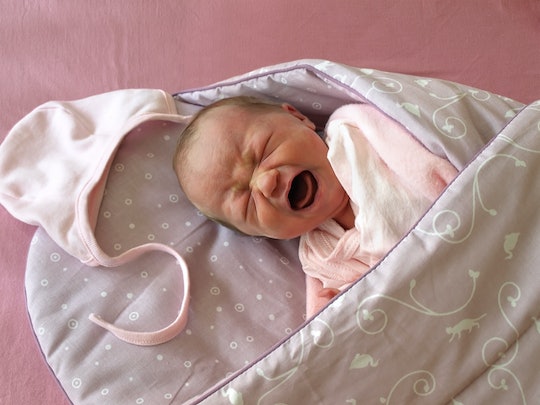 Here's Why Your Baby Might Hate Being Swaddled, Despite How Cute Baby Burritos Are

I am a lover of all things swaddle. I burrito'd the heck out of my children, and while it was sometimes a struggle, I found that it worked really well for my babies. Plus, I got really good at turning them into adorable little packages. I could probably swaddle a drunken frat boy at this point. However, not everyone is on the swaddle train as hard as I am. In fact, some parents are reasonably certain their baby loathes the swaddle. If that's the case, you're probably wondering, "why does my baby hate being swaddled?"

Swaddling is a safe, effective way at soothing fussy babies and helping them sleep while also diminishing their risks of SIDS, according to The Journal of Perinatology. Note, that this guideline only pertains to children up to the ages of 2 to 3 months, or when they're able to roll over in their sleep. Once they have achieved that milestone, swaddling should be discontinued. As to why your baby fusses when you swaddle them, it could be from a few different factors. One, you're swaddling them too tightly, not allowing for enough room and stretch to breath and rotate their hips. Two, they're not used to the new arm position, and letting you know. Three, they might be overtired when you begin to swaddle them, making the effort that much more difficult.

Swaddling helps to soothe babies who are fresh from the womb by recreating the environment inside the cozy space. It serves to keep their tricky limbs in check, especially when they're experiencing what's referred to as "the moro reflex," which is when your baby's arms shoot out from their body like you've startled them. They're not actually startled, and it has a purpose. It allows your baby to understand how their body moves in relation to the rest of their body, noted an article in Pediatric Secrets. It's just their bodies showing them "Oh, look at what your arm can do, isn't that terrifying? Feel free to commence with the screaming."

Swaddling stops that before it scares them, and that's why swaddling is only appropriate when they're sleeping or going to sleep. Your baby needs those movements to continue developing. However, your baby may throw an absolute fit when you wrap them up. As to why your baby hates to be swaddled, it's likely not what you're thinking, according to Dr. Karp, the author of The Happiest Baby on The Block.

Karp has previously noted in articles that babies are irritated with the change in position from arms in front of their chest to the arms at the side position. He told Precious Little Sleep to allow baby to be briefly upset, but that in time, this frustration will pass and sleep will take over.

The website for Dr. Sears gives another opinion — their research found that it has a lot to do with a baby's age. The older they get, the less they want to be swaddled. At that point, around 2 or 3 months old, babies begin to understand the movement of their bodies. They begin to bring their fists to their mouths on purpose, roll, and grab for objects. At this point, it is probably best to allow the period of swaddling to end. Not only that, but the American Academy of Pediatrics has stated in the aforementioned article that swaddling past this period increases a baby's risk of dying of SIDS. The website for Dr. Sears also added that if a baby is swaddled too tightly, without adequate movement available for the legs and hips, this can cause pain and your baby will likely avoid the swaddle by any means necessary.

Both Karp and the experts at Dr. Sears found that if your baby is very young, you should keep trying, as babies who are swaddled tend to sleep longer, which is good for everyone. But, if they're getting a bit older, and a bit more restless, it's a good time to say goodbye to the swaddle, and look at a sleep suit.