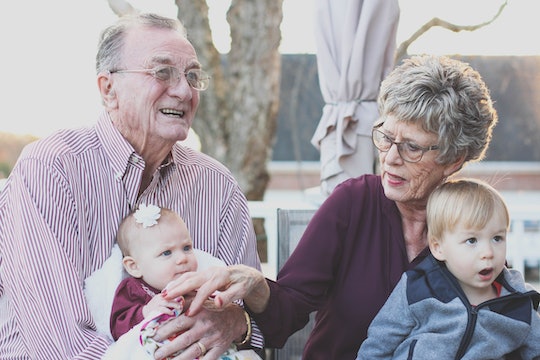 Why Does Your Baby Act Like They Hate Their Grandparents?

Many grandparents wait years and years for the opportunity to bond with their grandchildren. But, when the day finally arrives, the baby screams and screams at the mere sight of their well-meaning grandparent, and you are left feeling just awful about the whole situation. You might think, "why does my baby hate their grandparents?" You might feel a lot of pressure to rectify the situation, if nothing more than for an extra hand while you try your best to juggle this parenting thing. Why does your baby cry around their grandparents, and what can be done?

As it turns out, a fear of grandparents and other "strangers" can be a normal stage of development during infancy and toddlerhood, according to the Office of Child Development (OCD) at the University of Pittsburgh. This stage, referred to as "stranger anxiety," can occur even in safe environments and with familiar caregivers. As the OCD mentioned, stranger anxiety typically begins around 8 months and lasts through 18 months, but that's just an average. Stranger anxiety can begin as early as 4 months and last well through toddlerhood, depending on the temperament and personality of your child, the OCD noted. Though stranger anxiety can coincide with separation anxiety, they are seemingly separate phases.

According to Dr. Sears and Parenting, both stranger and separation anxiety are natural and healthy protective mechanisms. As babies become more mobile and are physically able to wander away from their parents, they may be around people that are unsafe, Parenting noted. Stranger and separation anxiety is nature's way of keeping baby close and securely attached to their familiar caregivers (namely, their parents).

There are a few things you can do to help ease your baby through this phase and, as Fit Pregnancy mentioned, patience is among the most important. Warning grandparents of this phase, and reminding them to be patient, non-pushy, and to keep providing love and attention is also important. Grandparents often take things like this personally (it's hard not to), but the truth is, it's usually not personal at all.

As the American Academy of Pediatrics (AAP) noted, the phase will ultimately resolve itself, and your baby's relationship with their grandparents will likely not become a casualty as a result of it. So tell them to relax. It won't take long before your child's toddling straight into their arms, even if they don't bring a present. (Lies. Grandparents always bring presents.)

More Like This
When Does A Baby Recognize Their Father? A Pediatrician Explains
The Best Travel Tips For Solo Parenting
Even If Your Baby Sleeps Better in Your Bed, It’s Still Not Recommended
Winter Travel Tips For Families
What Parents Are Talking About — Delivered Straight To Your Inbox