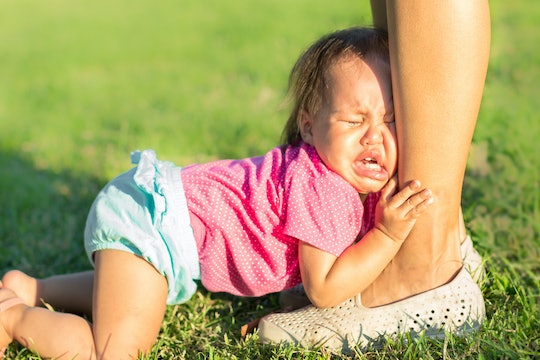 Oh, So *That's* Why Your Baby Headbutts Stuff When She's Freaking Out

Babies do a ton of weird things. As they develop, it's easy to start cataloguing everything you notice that seems as though it's out of the ordinary, only to later find out that literally every other child on planet earth has done that. Some of these little quirks are a bit more distressing than others. For instance, has your little one ever banged their head against you, their crib mattress, or other things when they're irritated? It's hard to watch. At some point, most parents have wondered why their baby headbutts things when they're mad.

Rest assured that it's a pretty common behavior. Pediatrician Dr. Amna Husain, M.D., FAAP, of Monmouth, New Jersey tells Romper that about 20 percent of babies will pick up this habit, though it's about three times more frequently seen in boys than girls. "Toddlers do it surprisingly for a wide range ranging from self-comfort to tantrums," she adds.

My daughter used to butt her head as she became tired, which The National Sleep Foundation reported is very common. She didn't bang her head hard, but she would lean against me on the sofa, or wherever we were, and slowly, rhythmically, thump her head against my arm, my belly, or my leg... whatever was easiest to get to. It probably looked really weird to onlookers. It began just after her first birthday, and she kept at it until she left for Pre-K.

Dr. Husain notes that my daughter's trajectory is a common one: "Often, we see this behavior between 18 months and 2 years, but it can persist until age 3." After around 3 to 4 years, the behavior typically subsides, she says. For my daughter, it seemed to be the snap of heading into a classroom all day that eased her out of that behavior. There was no Mama present to bang her head upon, so she simply stopped doing it.

What makes them do it? Why do babies headbutt things when they're upset to begin with? You can at least take comfort in the fact that this is generally a benign behavior, as pediatrician Lisa Lewis, M.D., explained on her website: "For parents, a baby or toddler who is head banging may be a stressful situation. This reaction is understandable, but understand that the banging is a self-soothing mechanism. Typically, after a period of time, head banging will reduce and then stop."

Dr. Husain agrees that this is often a self-soothing behavior, telling Romper: "As strange as it sounds, some toddlers do this to relax."

And it does sound (and look) pretty weird. She notes that you might see your baby "banging or shaking their head rhythmically from side to side as they’re falling asleep, when they wake up in the middle of the night, or even while they’re sleeping. Developmental experts believe that the rhythmic motion, like rocking in a chair, may help your toddler soothe himself."

As someone who still rocks back and forth (which isn't as uncommon for adults as you might think, according to PsychCentral) when I am upset, I can understand how that swing to the equilibrium could be soothing, even if banging my head might not be my first choice.

As you may have assumed, there are other times when you might notice a spike in their headbutting behaviors, such as when your baby is feeling unwell or teething, as pediatrician Alan R. Greene, M.D., explained on his website. Husain says that "Some toddlers also do it for pain relief, often associated with frustration such as with teething. It’s postulated that perhaps the toddlers use it as a distraction from the discomfort in their gums." Teething sucks, and these poor littles are looking for any way to get their mind off of the fact that bones are ripping through their gums.

The last major reason why babies butt their heads is when they're having a tantrum. They are trying to express themselves, and they're not getting their point across any other way, so they start headbutting things. Husain says that this is normal, attention seeking behavior. She urges parents to try to distract your child from their headbutting by setting up games or other attention grabbing activities that can re-route that impulse.

Fortunately, she notes that if babies ever head butt something hard enough that they hurt themselves, they're not likely to do it again. "They may bruise but that’s likely all the trauma that could happen. Since the shakes and head butts are usually fairly short lived and appear to have little effect on kids, we often recommend parents just monitor from a close distance but try to ignore the action if it’s happening very frequently."

If it is worrying you, Husain counsels parents to speak to a pediatrician. Otherwise, let it run its course, and keep them out of harm's way, and thank goodness, they will most likely grow out of it.

More Like This
Can You Give A Sleeping Baby A Breathing Treatment? Experts Explain
Celebrate Baby's First Christmas With These 40 Instagram Captions
Here’s What To Do If Your Baby’s Nose Bleeds After Suctioning
What Exactly Is The Ferber Method? The Sleep Training Approach, Explained