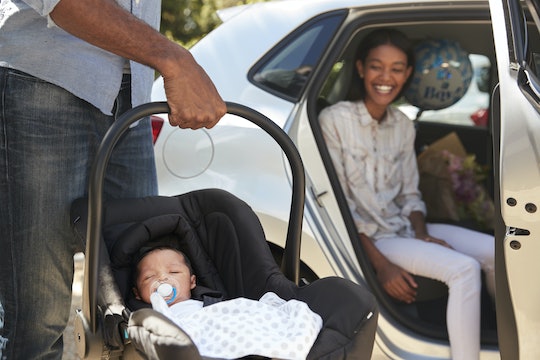 Want to know how many nights our babies slept through the night? Zero. How many nights did we bring them home asleep in their car seat, hopeful that tonight would be the night? So, so many. Most parents have caved and done a tour around the neighborhood to get a wakeful baby to go the F to sleep, only to find that the transfer between carrier and bed wrecks the whole operation. So what is it about the car seat that helps babies sleep so much better than a crib?

First, it's important to point out that while occasional naps in the car happen and there's nothing anyone can do about it (you're driving, so keep not wrecking the car), health experts advise that car seat sleeping is not recommended for babies. All babies should always sleep on their backs on a flat surface until their first birthday, the American Association of Pediatrics says, and should be removed from a car seat, bouncer, or other mobility device should they fall asleep.

But wait — aren't babies already on their backs in a rear-facing car seat? Yes, but the danger comes when their little jug heads fall forward and possibly constrict their airway. I swear, sometimes I write these things and wonder how we ever managed to evolve as a species.

But they love it! My children would only sleep in the car or in our arms and honestly, they got heavy real quick and sometimes I just let them sleep totally supervised in their seats. It's probably why they're still such light sleepers. Why is it so much easier for them to fall asleep in their carriers?

"Motion sleep in general is pretty easy to sleep to. Think about being on an airplane and how easy it is to drop your head and nap," says Christine Stevens, a Washington D.C. sleep consultant, in an interview with Romper. "In a car seat there's the rocking motion, you're pretty sedentary, and you're in the back seat and not being engaged. It's very easy to fall asleep."

And, Stevens continues, infants need a lot more sleep than adults and it's pretty likely that a nap time will coincide with a car trip. Parents shouldn't feel badly about their babies falling asleep in their car seat as long as they are in their crib the majority of the time.

"There is literally no way to keep a child awake in a car," she says. "I’ve had a couple of clients who have have to take kids to school for the first nap of day and the baby ended up having that nap in the car. When a child gets used to something, whether it's cars or carriers or strollers, that’s how they’re going to learn to go to sleep. But once in awhile is fine — rules for babies can be flexible."

For the safest possible head position to ensure that babies can sleep safely for short intervals, baby's head should be positioned to the side. If your infant still needs some support to keep from falling into the chin-to-chest position that inhibits breathing, the article above noted that two rolled up swaddle blankets to place on either side of the baby's body, not just the head, can help. Positioners often have too much padding and force a baby's head into exactly the position it's trying to correct. Also, buckles should be snug enough that they prevent slouching, and straps should be tight to assist in keeping the head in position. Once you've covered those bases, feel secure in knowing your baby will be fine snoozing in her car seat until you get home.