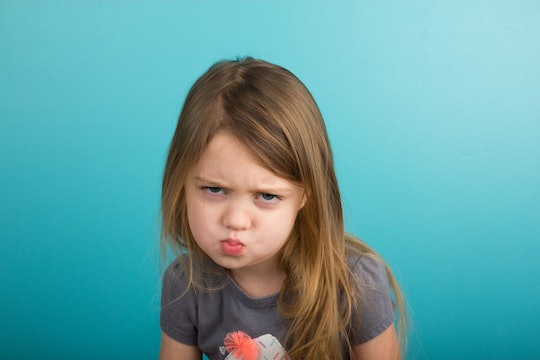 Here's Why Your Child Pinches, According To Science

No one wants to be the parent of a bully, even if the bully is 2 feet tall and hasn't exactly learned right from wrong yet. Having a child who perpetually injures other toddlers can be frustrating as parents seek to make play dates safe and happy experiences for everyone. One common misbehavior among small children is pinching and many exasperated moms are wondering, "why does my child pinch?" It turns out, he's probably not a little tyrant bent on world domination.

According to Jann Fujimoto, a speech-language pathologist in Wisconsin, there are two probable causes. In an interview with Romper, Fujimoto explains that many young children use negative behaviors like pinching because they don't yet have the language skills to effectively communicate their desires and feelings. When he or she is still in the pre-verbal stage, the use of their physical body is really all they have.

But sometimes your kids are old enough to recite entire monologues to your weary ears and yet are still engaging in behaviors like biting and pinching. Clearly they don't have the pre-verbal excuse, so what's up with that?

A second common scenario, Fujimoto continues, is when a child who does have adequate language skills uses behaviors like pinching because she has noticed that it receives immediate attention from everyone present.

So what's a mom to do? Rather than exerting the majority of your energy on discipline, Fujimoto encourages parents to focus on developing appropriate language usage instead. "Be sure to provide positive time and attention, so they do not have to act up in order to receive attention," she tells Romper. "When they use their words to communicate, reinforce that behavior with positive words like 'thanks for using your inside voice to ask nicely' or 'thanks for telling me about X, Y, Z.'"

The good news is, the sooner you equip your kids to express themselves verbally, the sooner they will develop conflict resolution skills that will last a lifetime. But until you see the fruit of your labor, it might be a good idea to stay close by during play dates.

More Like This
A Parent’s Guide To Stomach Pain In Kids
Do Parents Really Need To Worry About Their Gas Stoves? Pediatricians Explain
Viral Hives In Children: What Doctors Want You To Know
Winter Travel Tips For Families
What Parents Are Talking About — Delivered Straight To Your Inbox