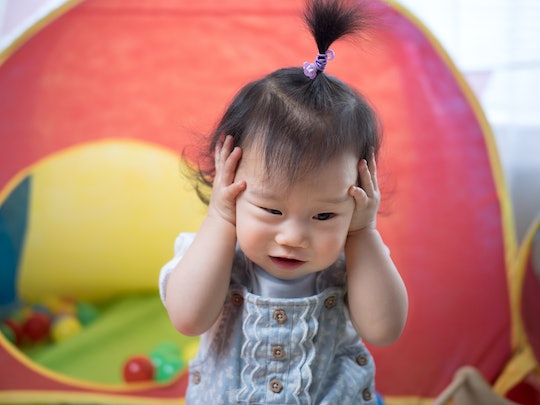 Here's Why Your Kid Randomly Pukes, According To Pediatricians

There are few things that can tug on a parent's heartstrings more than a sick babe. Fever, coughing, vomiting — they're all pretty bad. But that last one is the real doozy, especially if your kid is throwing up, but not really sick. As a parent, you could be really concerned about the possibilities of what's affecting your child. (And also a little annoyed. What gives, kid?) While you're cleaning another crib sheet or couch cushion, you might be thinking, "Why does my kid randomly puke?"

According to pediatrician Dr. Steve Silvestro, MD, of Georgetown University Hospital and Metropolitan Pediatrics, kids might seem to randomly vomit, but there is usually a reason. "Obviously," he says in an interview with Romper, "a stomach bug would cause vomiting. However, hard or prolonged crying can cause vomiting as well." The reason is two-fold, Silvestro explains. When a child is crying very hard, he is repeatedly squeezing his abdominal muscles, which can force stomach contents up and out. "Also, crying produces a lot of tears and mucus," he adds, "most of which gets swallowed, and can irritate the stomach."

As Parents noted, the reason why your kid is vomiting so much could be something as simple as having a very sensitive gag reflex. The gag reflex is a normal, instinctual contraction of the throat muscles and it works to protect the airways and keep you from choking. In some children, this reflex can be so sensitive that it can be activated by the slightest thing, even while eating, and be so forceful that it causes them to vomit.

Silvestro agrees. Many kids have a very sensitive gag reflex, he says, and young children have more tissue in the throat (for example, their tonsils are usually larger than an adult's). As a result, they are more likely to activate their gag reflex, even by simple things like chewing on their fingers/toys or stuffing too much food in their mouth, and then throw up.

However, sometimes there could be a larger cause. According to pediatrician Dr. Jarett Patton, MD, Fellow of the American Academy of Pediatrics (FAAP), if vomiting occurs frequently, symptoms could be caused by cyclical vomiting, severe heartburn, or gastroesophageal reflux disease (GERD). If vomiting persists and does not seem to be from an infectious cause like a viral or bacterial illness, Patton tells Romper, your child should be evaluated by a physician.

If your child is vomiting randomly and consistently, it's best to talk to your doctor about the occurrences and when they happen. They will be able to take in your information, in addition to your child's medical history, and guide you on the next steps of figuring out what's going on. Rest assured that, for the most part, it's just one of those things that kids are prone to. (No matter how queasy it makes you.)