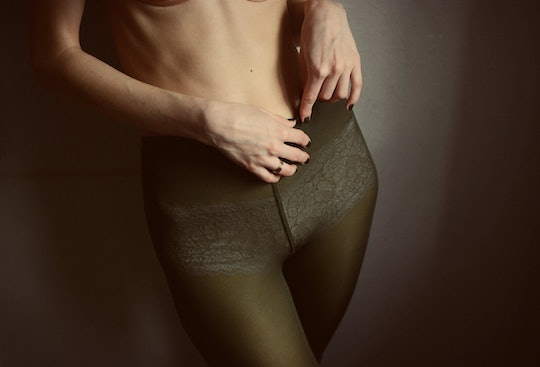 Why Does My Vagina Smell Like Metal? Read This Before You Freak Out

Practically any part of your body can smell a little different under the right conditions, but, other than general sweat smells and body odor, you're likely most concerned about vaginal odors. Women tend to be self-conscious of how they smell down there, and if you think you detect a whiff of something that seems like it isn't exactly right, you might get concerned. Vaginal odors indicate all sorts of different things, partially based on what it is you think you smell, but if you're wondering, "why does my vagina smell like metal," here's what you need to know.

First of all, vaginas are supposed to have a smell — they're not completely odor-neutral. The exact scent and strength can vary from woman to woman, so if you feel like you smell, but, when girl-talking with a friend she says she doesn't think she does, it doesn't necessarily mean there's anything wrong with you. That being said, there are also smells that indicate that there might be something else going on.

If you notice a metallic scent, don't panic and immediately try to over-correct. That can just make things worse. As Dr. Mary Jane Minkin, clinical professor in the Department of Obstetrics, Gynecology, and Reproductive Sciences at the Yale University School of Medicine, told Women's Health, using strongly-scented soaps to try to mask or alleviate the smell can further impact your vagina's pH level, which, in turn, will make the situation worse. You shouldn't actually have to do anything special to try and clean your vagina if you don't have an infection or other actual issue, so if you're tempted to try products, you should first talk to your doctor.

If the smell continues to linger, you haven't had sex recently, and your period is long-gone, you may want to consider having a chat with your gynecologist to rule out infections and the like, regardless of if you're considering the use of feminine hygiene products or not. Additionally, if you have a copper IUD, the metallic smell you're smelling down there could be due to the IUD, as some posts on patient message boards and forums link a metallic vaginal smell to their IUD use, so that may be something you'd want to ask your doctor about, as well.

Regardless of the cause, a metallic smelling vagina is likely no real cause for concern. More often than not, it's your body's response to run-of-the-mill things like your period and sex. The pH change might not even be otherwise noticeable, unlike the situations that cause many other vaginal odors (which can be accompanied by itchiness, pain, or general discomfort). Typically, all you'll need to do is ride it out and wait for the smell to subside. While that might not be comforting when you're in the midst of it, it's always better to deal with a minor (but ultimately fine) inconvenience than it is to do nothing for a problem that requires action — or do something that's going to make the problem worse. Talking to your doctor, even though it might be embarrassing, can't ever hurt if you're really concerned. But know that in most cases it'll be on its way out before you know it.