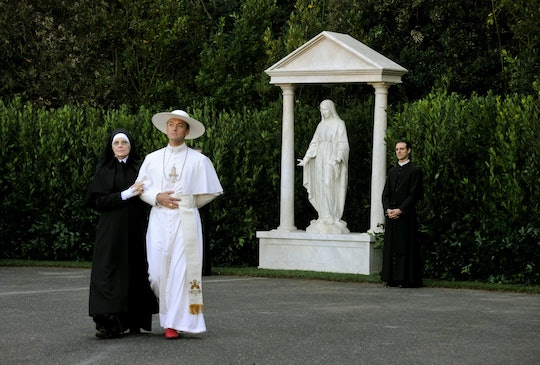 'The Young Pope' Has Unusual Taste In Beverages

The protagonist of The Young Pope is an unusual choice for the job he's been given; that much is true from the very start of the first episode. It's not just because of the fact that Pope Pius XIII is under fifty years old, though that certainly sets him apart from the popes that came before him. His personality isn't what anyone in Rome expects from the very first moment of his very first day on the job, when he turns down a mouth-watering spread of breakfast foods and asks for one thing instead: a Cherry Coke Zero. But why does Pius XIII drink Cherry Coke Zero?

Apparently Pope Pius just likes that jolt of sugary goodness first thing in the morning, though that's no excuse for turning down entire plates of donuts and pancakes. Then again, according to Pius himself, he eats very little. And when it comes to upholding his liquid diet, he's very firm: when offered a regular old diet Coke to sip while his Church underlings rush out to fulfill his order for Cherry Coke Zero, he shuts the offer down. He's not going to settle for less. He's the Pope, after all, and Popes don't settle!

The pope demanding a Cherry Coke Zero is just one of a few funny details sprinkled throughout the otherwise slow-moving first episode of The Young Pope. There's a similar moment that involves Pius making a cardinal fetch him a cup of coffee like an intern, and yet another where he lights up a cigarette and flat-out states, "There's a new pope now." Just in case the people watching at home didn't get the memo, he's Not Like Other Popes. He's a Cool Pope. He's a Loose Cannon Pope. He's set apart from all the other high-ranking members of the Catholic Church, and there's just no predicting what crazy thing he'll do next.

If you think all of that sounds ridiculous, you would be right. It is. Though the show leans into the humor of these moments in a way that proves it is somewhat self-aware, each moment is still a heavy-handed way to telegraph the fact that Pope Pius XIII is very unusual and very new. He's young, he's American, he's like nothing Rome has ever seen before.

The problem is that characters like him are actually very familiar to most audiences. White male antiheroes who are arrogant, demanding, and self-absorbed are nothing new, no matter how many Cherry Coke Zeroes they sip first thing in the morning.