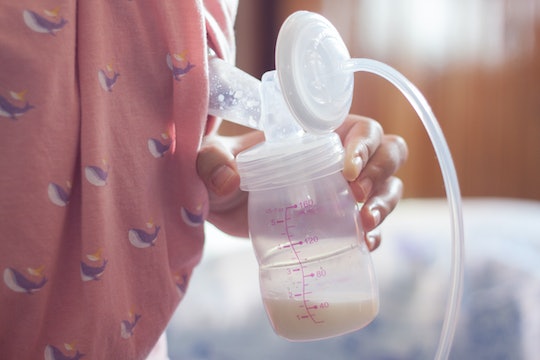 Here's How A Breast Pump Can *Actually* Jumpstart Labor

If you're at that point in your seemingly never-ending pregnancy when you've surpassed your due date, you've probably tried to induce labor "naturally." From eating spicy foods to doing yoga inversions, there are all kinds of ways people — from your great grandma to your next door neighbor — believe you can get the show rolling at home. Nipple stimulation, believe it or not, is one method experts suggest when trying to induce labor. So, as a suggested practice for induction, why does pumping induce labor? And, perhaps more importantly, when looking at the science behind nipple stimulation and medicine-free induction, does it actually work?

First, let's talk about what the term "inducing labor" actually means. According to the American Pregnancy Association (APA, when you induce labor, you are starting the birth process artificially (be it through medical interventions or other means) by stimulating uterine contractions in order to attain a vaginal birth. If induction is not done for medical or emergency reasons, the induction is considered "elective."

You can't start a labor induction without a dilated cervix. As the American College of Obstetricians and Gynecologists (ACOG) reports in their 2009 Revised Guidelines of Labor Induction, the first step of an induction is the "ripening" (or dilation) of the cervix. If the cervix is not sufficiently dilated, mechanical cervical dilators (yikes) or drugs are used. Once the cervix is dilated enough, then labor can be induced. One of the different methods that ACOG lists to induce labor (in a medical setting), is nipple stimulation, either via a pump or manually.

But how do we get from pumping or manually stimulating the nipples, to inducing labor? What's the link? Well, according to the APA, the act of stimulating the nipples releases the hormone oxytocin into the bloodstream, which can cause contractions. Because contractions thin out the cervix and help it open and dilate, nipple stimulation can actually ripen the cervix. As the website KellyMom points out, oxytocin is responsible for all kinds of contractions, from those in the breast tissue that allow for women to "eject" milk, to the contractions in the uterus during breastfeeding. Oxytocin is also the hormone released during intercourse, which is one of the reasons intercourse is thought to induce labor, too.

The method of using nipple stimulation to induce labor has been employed for many years. A 1986 study published in the U.S. National Library of Medicine (NLM) National Institutes of Health's (NIH) website, the use of an electric breast pump (i.e. nipple stimulation) was proven to be as effective as oxytocin infusion as a means of induction. In a 1993 study published on the NLM/NIH website, 300 patients with uncomplicated term pregnancies were put in three randomized trials to evaluate whether gentle, "unilateral" breast stimulation was effective in ripening the cervix. The result of the study showed that a significant amount more women in the study group went into labor when compared with the control group in each of the three trials.

While some people may use a breast pump, a paper published on the website, American Family Physician, explains that the most commonly used technique of nipple stimulation for induction is gentle massage of the breasts or the application of warm compresses to the breasts "for one hour, three times a day." The site also goes on to state that even though breast stimulation releases oxytocin, the aforementioned studies that were conducted (as well as others, mainly in the 1970s and 1980s) to support the idea of breast stimulation as a viable way to induce labor were poorly designed.

Studies about using a breast pump, specifically, to stimulate the nipples and lead to the induction of labor are scarce. What we do know is that nipple stimulation by various means releases the hormone oxytocin, which stimulates the uterus to contract. Contractions of the uterus help cause the cervix to dilate, thereby helping to begin the process of childbirth. All in all, it is a bit of a stretch to say that nipple stimulation "results in" labor, but there are some pretty strong links between the hormone it releases and the types of gears it starts moving when it comes to childbirth.

It is probably best not to try this one at home. Unlike drinking raspberry tea, or having intercourse or eating that spicy Chinese food, nipple stimulation to induce labor is likely best performed under the supervision or care of a medical professional.