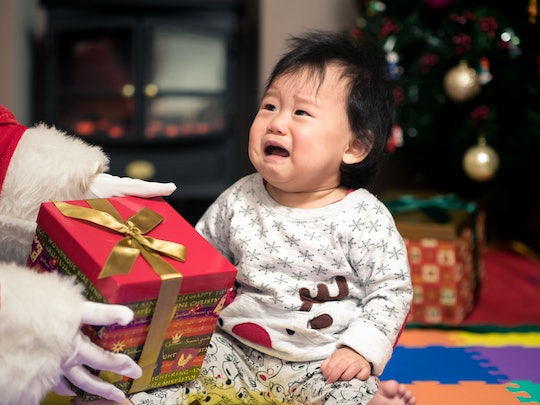 According To Experts, It's A Good Sign When Your Baby Cries At Santa

If you've ever strolled through a mall where kids were lining up to meet Santa Claus or scrolled through a collection of photos depicting shrieking babies on Kris Kringle's lap, you know that many small children find the man in red to be flat out terrifying. But why do babies cry when they see Santa? After all, he's theoretically one of the most benevolent characters ever (and he brings toys to boot!). So what's with all the tears?

According to experts, if your baby is freaked out by Santa, it doesn't mean she's showing signs of irrational fear or anti-social tendencies. This type of reaction isn't just perfectly normal — it's perfectly rational, too. "Remember, little children haven't spent the last 30 years watching Miracle on 34th Street and waiting for Santa to leave presents on Christmas morning," Ari Brown, M.D., author of the Baby 411 series, told Parents. "This is a whole new ballgame for them. They might see Santa simply as a stranger in red." In other words, the theory of something is easier to digest than something tactile, which is something even us adults can relate to.

It makes sense when you think about it: Without a comprehensive understanding of the complex holiday mythology we grown-ups take for granted, all babies know is that suddenly Mommy has plopped them in the lap of a strange man with a weird hat and funny beard. Imagine if someone did that to you, with nary an explanation! Really, it's a miracle that any babies don't immediately start sobbing. And in fact, this type of reaction can actually be a good sign.

Mandy Seyfang, a senior occupational therapist in Australia from the Department of Education and Childhood Development, told ABC Adelaide that babies who freak out when faced with Father Christmas are simply beginning to understand the idea of "stranger danger" and naturally, that's something you want your kids to understand.

"Often we actually say that there could be a red flag if children are running off to strangers, are approaching strangers for comfort at this age [up to five years old]," she said.

"That would be a sign that maybe things are not going so well for young children. To have that natural fear of the stranger, of Father Christmas, of Santa, is really a good sign for your children."

It's true: Under any other circumstances, you'd actually want your baby to sound the alarm if they were unceremoniously handed off to a guy in a fire engine-colored suit with a weird hat. They've only been on the planet for a period of months — how are they supposed to know this isn't a dangerous situation? But even as kids get older and become acquainted with the concept of Santa Claus, don't expect their anxiety to automatically diminish. On the contrary, as they begin to wrap their heads around who this Santa dude really is, they might get even more worked up.

"We've also always got to take into account too that this stranger is not just any stranger, it's a stranger that has got lots of emotional loading," said Seyfang.

"The idea that this person might have lots of hopes and day dreams that you've been planning around the list of what you're wanting for Christmas and that he's got some special powers, that he knows if you've been naughty or nice and can bring you lots of presents or not. So you can see why children too can get quite emotionally loaded up for this special trip to see Santa that then might all break down quite quickly into tears if they get overwhelmed by that."

No pressure, kid! It does sound like a bit too much to handle when you take all of these factors into consideration. But if you've truly got your heart set on a keepsake photo, there are ways to make the process less traumatic for your little one, like staying within your child's vision at all times.

"Children work out if something is safe or not at that age by looking for the parent to support them in that," she said.

Sit near your child while the photo is taken, and make sure your baby sees you having a positive interaction with Santa's stand-in. If everyone is game, you can even take a turn on his lap yourself, before your baby, but simply shaking his hand with a big smile on your face might also do the trick. And if, despite all your efforts, your baby still ends up wailing for the camera, don't despair. It doesn't mean you've scarred her for life, and at the very least, she certainly isn't alone. Next year, you might just want to ask her if she's up for posing and chatting before you take your place in line.