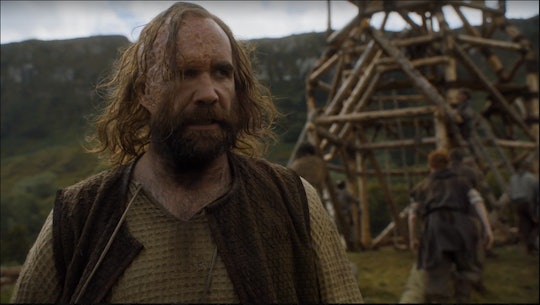 Why Does The Elder Brother Have The Hound? A Beloved 'Game Of Thrones' Character Returns

When last we saw Sandor Clegane, he was bleeding out on a hillside at the hands of Brienne of Tarth, but in the Season 6 episode "The Broken Man," he returns, in service of The Faith. So why does The Elder Brother have The Hound? It turns out he was rescued in the eleventh hour.

"When I found you, I thought you had been dead for days," The Elder Brother recalls, telling Sandor that he was already beginning to stink of death and that he had what we in the real world call a compound fracture — bone was sticking out of his skin where he had broken his leg. The Elder Brother was on the verge of burying him, but then The Hound coughed. (I guess checking pulses and/or listening for breathing is not in the Game of Thrones healing handbook.)

He admits that he thought The Hound was going to die a dozen times after he was found, but he wound up pulling through, proving — in The Elder Brother's opinion — that the gods have a plan for Sandor Clegane. The Hound is skeptical, but he seems happy to put his strength to good use chopping firewood, etc., for the non-denominational religious compound The Elder Brother seems to be building.

(Did I mention they have ale there?)

Another thing that may draw The Hound and The Elder Brother together is that The Elder Brother is a former soldier, too. Eventually, he feels so guilty for his war crimes that he leaves fighting behind to embark on a religious/spiritual journey instead. He gathers up followers, swears no loyalty to either The Old Gods, or The Seven, or The Lord of Light, and sort of just starts his own commune. It's possible that The Hound is drawn to this no-strings way of life as much as he feels he owes The Elder Brother for rescuing him. Plus, The Elder Brother knows first hand the atrocities The Hound has borne witness to, since they were both warriors.

Unfortunately, their connection is cut short when The Brotherhood Without Banners rides through compound and kills everyone while Sandor Clegane is out chopping firewood. The Hound Survives, but he finds his rescuer hanging among the dead.

So much for a religious awakening.