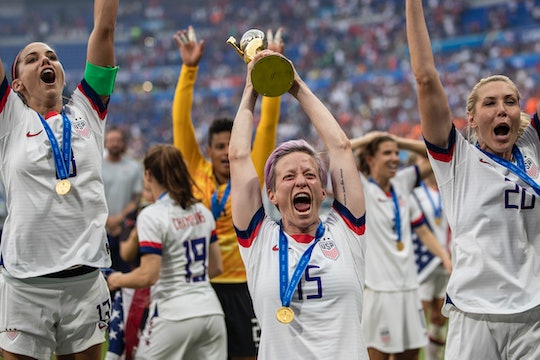 This Company Has Joined The U.S. Women's Soccer Team's Fight For Equal Pay

More than a week has passed since the U.S. women's soccer team beat the Netherlands and claimed its fourth Women's World Cup title. And although the excitement has worn off a bit regarding this impressive victory, a giant problem still remains — pay inequality. Because unfortunately, the gender pay gap is still alive and well in 2019 — and this goes for highly successful professional athletes, too. So, why does the U.S. women's soccer team earn less than their male counterparts? One company is taking action against this unfortunate double-standard.

Those who followed the U.S. women's team's phenomenal performance during the Women's World Cup probably noticed people weighing in on more than just the players' skills. That's partly because despite their tremendous talent and record number of World Cup wins, the women are still paid less than their male counterparts — especially when it comes to Word Cup bonuses, according to

Members of the U.S. women's team reportedly made roughly $250,000 each in prize money from their Word Cup run, compared to more than $1.1 million each if the men had won the World Cup (Spoiler alert: The men did not qualify for the 2018 World Cup). And you don't have to be a math whiz to realize that's a huge disparity, especially since this doesn't even take into account their regular season pay.

So, it wasn't exactly surprising when the crowd erupted into chants of "equal pay" following the U.S. women's team win over the Netherlands on July 7.

As it turns out, fans aren't the only ones upset by the pay disparity because multinational consumer goods corporation Proctor & Gamble has stepped up to offer the U.S. women's soccer team financial support in light of the gender pay gap. And on Sunday, Secret Deodorant — which is owned by P&G — announced its plan to donate $529,000 (or $23,000 each) to the 23 players on the U.S. Women's Nation Team roster, aka the same ladies who won the 2019 FIFA Women's World Cup, according to The New York Times.

Additionally, Secret — which is one of U.S. Soccer’s official sponsors — took out a full-page ad in Sunday's newspaper calling for the U.S. Soccer Federation (USSF) to get "on the right side of history," according to. You tell 'em, Secret.

It's hard to say why the USSF deems it fair to pay female soccer players less than members of the men's soccer team (you know, other than blatant sexism), but according to a May court filling, the pay gap is supposedly "based on differences in aggregate revenue generated by the different teams and/or any other factor other than sex," the Washington Post reported. The federation also noted the men's and women's teams are “physically and functionally separate organizations.”

If you're wondering why there's a court filing in the first place, it's because 28 members of the U.S. women's soccer team filed a class-action lawsuit against the USSF on March 8 — which also happened to be International Women's Day. In the lawsuit, players claim that “institutionalized gender discrimination” is evident by their pay, medical treatment, travel arrangements, and workload, according to The New York Times. They are seeking equitable pay and treatment, as well as damages including backpay, according to ESPN.

The USSF did not immediately respond to Romper’s request for comment regarding the lawsuit.

According to the paperwork filed, it seems sex does play a part in the USSF's paying the women's team getting paid less. "Despite the fact that female and male players are called upon to perform the same job responsibilities on their teams and participate in international competitions for their single common employer, the USSF, the female players have been consistently paid less money than their male counterparts," the lawsuit reads, according to PopSugar Fitness. This little bit in particular gets right to the point:

This is true even though their performance has been superior to that of the male players — with the female players, in contrast to male players, becoming world champions.

Personally, I think Secret deserves a standing ovation for stepping up, speaking out, and working to close the pay gap for the U.S. women's team. And hopefully, its efforts will inspire the USSF to take a closer look at the organization's pay practices.