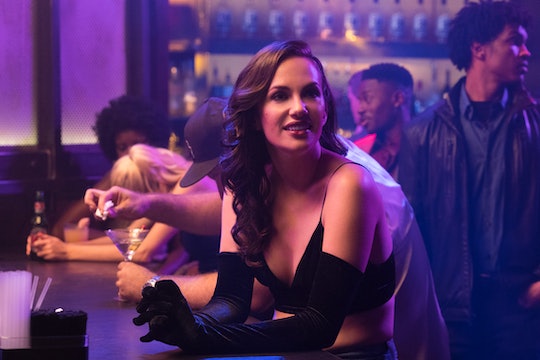 Theo On 'The Haunting Of Hill House' Is Extremely "Sensitive"

Now that the entire season of The Haunting of Hill House has aired on Netflix, you might have a few questions to ponder. One of the most intriguing characters on the show is the middle Crain daughter, Theodora (Kate Siegel), whose experiences in Hill House have left her deeply affected. She’s rarely seen without her hands covered, so why does Theo wear gloves on The Haunting of Hill House? It’s certainly not a fashion choice.

Warning: Spoiler alert for The Haunting of Hill House

According to actress Kate Siegel, who plays Theo on the series, the gloves are meant to protect her character from feeling other people’s emotions. “Through a strange encounter with a ghost, I developed a psychic power where when I touch people I get a sense of their trauma or their past,” she says in an interview with Red Carpet Report TV. “Which is unfortunate for Theodora because she hates feelings. She just wants to be left alone to read a book and drink some whiskey, but she’s inundated with this trauma and these feelings.”

The Haunting of Hill House follows the story of Theo, her four siblings, and her parents Hugh (Henry Thomas) and Olivia (Carla Gugino) Crain. The family purchases Hill House, with the intention of moving in for the summer and then flipping it for a profit. But soon after the family moves in, the house reveals itself to have sinister intentions of its own. The house is hell bent on keeping all who enter within its walls forever, and it enlist the help of its resident ghosts to do its bidding.

In Episode 3, viewers see young Theo’s (Mckenna Grace) ghostly encounter that leaves her with her psychic abilities. As she sleeps on her bed, a child (whose face you can’t see) snuggles in her bed behind her and holds her hand. Theo assumes it’s her little sister Nell, but when her hand is squeezed a little too hard, she turns to find no one there. “So whose hand was I holding?” she asks, as she stares at her hand. This marks the beginning of her psychic connection to things and people around her.

Olivia tells Theo that she and her grandmother were also “a little sensitive,” hinting that supernatural powers may run in the family. She gifts Theo a pair of gloves so that she can keep her developing psychic powers at bay. So, from then on, Theo wears gloves as protection from feeling other people’s emotions and trauma.

As an adult, Theo is now a child psychologist, who seems to be uninterested in developing real relationships, probably because she doesn’t want to deal with the wounds of her past or anyone else's. In Episode 3, Theo tells one of her young patients how her fear as a child made her close herself off to the world. "When I was scared, I would imagine myself building a big wall all around me made of the strongest bricks in the whole world, I would imagine myself putting another one on, one after the other, until that wall was so thick and so strong, I knew I'd be safe in there forever," she says. “Kids like us have been through more than other kids. We make ourselves really safe, and no one ever gets in.”

Living with a haunted history and the added burden of feeling other people’s pain can’t be easy, so it’s no wonder Theo keeps her gloves on. However, after learning about the house, and what exactly happened to her family in the season finale, it seems that Theo was able to open herself up just a bit. She finally makes a commitment to her girlfriend, Trish (Levy Tran), and the two move in together. While it’s still not clear if the series will come back for a second season, it would be nice to revisit Theo and the remaining Crain crew to see how they are faring after their experiences with the house the second time around.