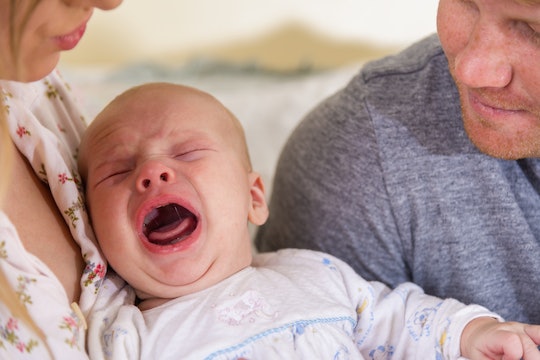 Why Does Your Baby Seem To Hate Certain People?

The situation can get embarrassing quickly when your baby snubs someone — especially if they cry every time that certain somebody comes around. The awkward factor escalates quickly as you try to make sense of why your little one will have nothing to do with your Aunt Edna. As an adult, you have the capacity to identify unlikeable qualities in others, but why does your baby seem to hate certain people? Could it be that even the youngest of souls has the ability to notice and form opinions about people's character? Perhaps a baby's social skills are more advanced than we give them credit for.

To understand why babies may not like someone, a pair psychological scientists studied what factors influence youngsters to find others likable. In their study, which was published in the journal, Psychological Science, the researchers found that babies prefer people who are nice to others that are like them. Additionally, the babies in the study also liked individuals who were mean to those that were not like them. This means that babies can identify people who will protect them, based on the way they treat others who are similar or unlike themselves. And they often respond to these people accordingly.

This study points to the fact that, if a baby seems to hate certain people, it could be due to the way the baby has observed that person treating others. Your baby's perceived threat or fear would be that the person in question would not protect or meet their needs. According to Psychology Today, there are certain actions that cause babies more distress than others, which could cause a child to dislike someone. Not holding them enough, leaving them alone for too long, and ignoring them, all are possible reasons a baby could decide they don't like someone. But how can someone whose brain is still developing figure people out so quickly?

In an article for Parenting magazine, pediatrician Dr. William Sears writes, "Around the age of 4 months, babies begin studying people in an attempt to discern, among other things, who can be trusted." If your little one's spidey sense starts tingling around certain folks, there is a good chance they're going to want to keep their distance from that person.

If your baby appears to hate certain people, is most likely just developmental, meaning she will grow out of. You're little one is learning to trust herself and protect herself from those she doesn't feel comfortable around. Although it may seem awkward in the moment, it's a super important life skill to develop and one that could keep her protected as she grows.