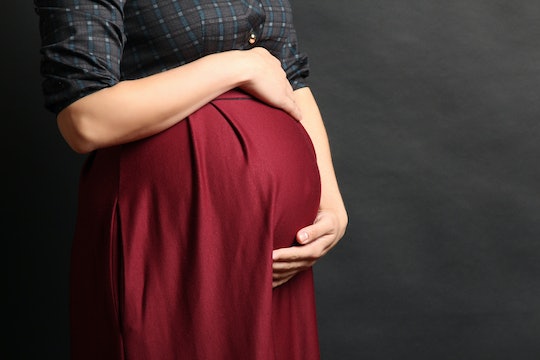 The Important Reason Your Belly Drops During Labor

If you’re pregnant, then you know that some people tend to see your growing bump as a conversation-starter. It’s like pregnancy is an open invitation for others to share the most random — and horrifying — stories about labor and delivery with you. In fact, the first time I heard anyone use the term drop and baby in the same sentence, I thought they were talking about a freak accident. As it turns out, that was not the case and I quickly realized that I should probably stop watching I Didn't Know I Was Pregnant. So, why does your belly drop during labor and what does it mean? Thankfully, it's not nearly as scary as it sounds.

Dropping, which is also referred to as "settling" or "lightening," means your baby is in a lower position in the womb, as the American Pregnancy Association noted. Now that you know what the term actually refers to, the next question you're probably asking yourself is, why does your baby move into this lower position? The answer is actually surprisingly simple, and makes a lot of sense once you think about it. According to the medical advisory board at the Baby Center, your belly drops, to make baby's journey through the birth canal easier.

In addition to getting your little one closer to the finish line, your belly drops before or during labor to help put your baby in a head-down position, as OB-GYN Dr. Michele Hakakha told The Bump. But it's important to remember that everyone is different and no two labor experiences are alike. Some women may have carried low throughout their pregnancy and won't really notice a significant "drop." Others might feel a "lightening" two to four weeks before going into labor, as the experts at What To Expect noted.

Basically, there's no strict timetable for when your belly will drop and it might not look the way you'd expect — and that's all normal. On the bright side, Dr. Sear's website noted that a perk of your baby dropping is you can breathe better and will probably have less heartburn since your baby isn't as close to your rib cage anymore. So even though there might be more pressure on your pelvis and bladder, at least you can (literally) breathe easy as you wait for your little one to make their entrance into the world.