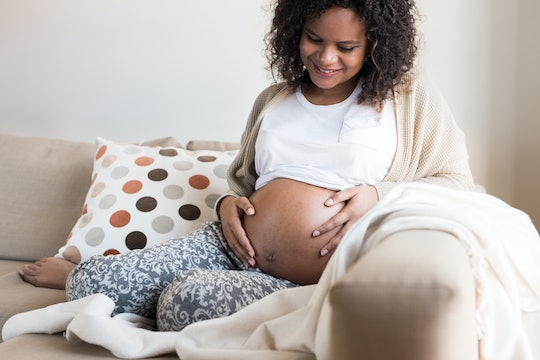 Why Does Your Belly Drop During Pregnancy?

Many women notice a significant change in their belly's position toward the end of their pregnancy, often referred to as their belly dropping. Although this may conjure up some wild images, the idea of the belly dropping references something called "lightening." It can make you feel some discomfort (even if it doesn't seem like you could possibly feel more uncomfortable), and also warrant some unnecessary comments from strangers about your belly bump. So, why does your belly drop during pregnancy? It's actually a good sign.

In a nutshell, your belly dropping means that you're nearing the end of your third trimester and prepping for labor. But in the bigger picture, it signifies so much more. Although your belly generally drops toward the end of your pregnancy, that doesn't necessarily mean that labor is about to begin, according to Web MD. It's simply a sign that your body is beginning to prepare for labor. Your belly drops when your baby's head moves lower into your pelvis.

Healthline noted that, for some women, their belly drops just a few hours or days before labor; while others, it can happen weeks before labor really begins. Every woman's body responds differently to the pregnancy and labor process. And because labor is generally a process, so is your belly dropping.

The position of your baby as it drops is referred to as the "station" of the baby's head according to Beth Israel Deaconess Medical Center. The number of centimeters the baby's head is above or below your mid-pelvis (or ischial spines) is how the station is measured. Healthline shared that the highest station is -5 and the lowest is +5. When your baby is at his highest station, his head is still above your hips. And the lowest means his head is out of your body.

As your baby gets into position for labor and even while you're labor progresses, his head will move lower and lower. For some women, their baby may settle in at a +1 before they've even gone into active labor, which causes the belly drop effect.

If you're nearing the end of your pregnancy and curious when your belly might drop, Dr. Sears suggested most first-time moms will have their baby drop during the last two weeks of pregnancy. For mothers who've already been through the birthing process, it's very plausible that timeline moves up even earlier in the third trimester.

When your baby's head does start making its way down, it's a feeling that you're bound to notice. There are also some pretty obvious signs your baby has dropped that come along with that feeling. For example, it may be easier to breath with the pressure off your lungs yet harder to walk with more weight on your pelvis.

Although it's never possible for moms to predict when their belly will drop, it does happen in every pregnancy – whether it's weeks before labor or hours before birth. Knowing what to expect takes some of the pressure (not literal unfortunately) off your belly dropping and can give you some comfort in knowing it means you're towards the end but not necessarily in active labor just yet.