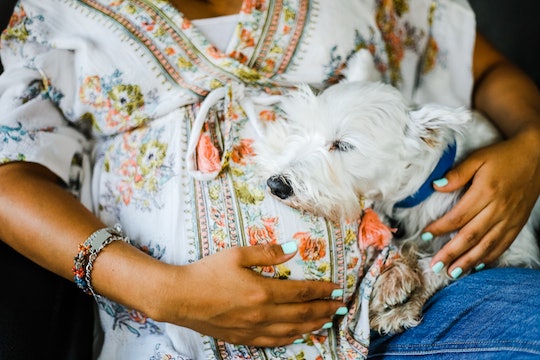 When I first told my husband I thought our dog was acting differently toward me during this pregnancy, he didn't believe it. "There's no way he can tell," he scoffed. Fast forward a few months, and my husband's a believer. I've got a 20-pound guard dog glued to my side at all times, following me to the bathroom, "protecting" me from just about everything, and always snoozing on my baby bump whenever I'm still. Turns out, this behavior isn't unique. Why are dogs so obsessed with sleeping on their pregnant owner's belly, and how on earth do they even know?

My little rescue mutt Jack's behavior started changing long before any bump was evident to the rest of the world, and apparently his powerful snout may be the reason. "When you're pregnant, all the hormones flooding your body are likely to alter your scent somehow. Not much gets by the canine nose, so there's a chance your dog caught wind of a change in you – maybe even before you did," according to Animal Planet. In early pregnancy, your dog may not know exactly what is happening, but they may detect something is different and start paying closer attention.

Of course, it's not long into pregnancy when the more observable changes begin. "Overall dogs (and cats) can be very sensitive to new changes in their home. Whether it's moving, new people in the house, or even rearranging furniture," Dr. June Wiley, DVM at Banfield Pet Hospital, tells Romper. Additionally, physical changes in their owner can alert your pets that something weird is going on. "They're masters at reading body language, so they'll notice when your movements start to get more awkward," notes BabyCenter. Changes in your gait and mobility (and all that huffing and puffing just to get off the couch!) may make you appear more vulnerable to your loyal pooch, which can explain their desire to be near you. Again, they (likely) have no idea that there's a baby brewing, but they're aware that their person is not acting totally normal.

When it comes to belly-nuzzling, experts have a few different hypotheses. Dogs that have smelled, sensed, and seen changes in their owner may simply feel more protective or attached to their owner, which would explain the increased snuggles. If your fur baby notices those oh-so-pleasant pregnancy mood swings, they may feel compelled to offer their comfort. Peter L. Borchelt, PhD, a certified animal behaviorist based in New York, explained to Health, “Some dogs can be very sensitive to people’s moods, and they will respond if they know their owner is upset or angry." That explains why Jack has headed straight for my lap every time I've shed a tear over the past 34 weeks.

As dog lovers know, no two dogs are the same and therefore no two dogs handle pregnancy the same way. While some dogs become more affectionate, other dogs may become more timid, fearful, or even aggressive, according to the American Kennel Club. Not only are you changing, their home base is likely changing as well. Small additions, like a new crib or a freshly-painted nursery, are enough to throw them out of whack and affect their behavior. Experts recommend preparing the dog for your family's new addition before the baby actually arrives by doing things like walking them while you push an empty stroller, introducing them to babies and young children, and working on their basic obedience skills, explained Parents.

We may not be able to communicate with our dogs, but they're incredibly perceptive creatures. If your dog is particularly clingy during pregnancy, embrace it! Consider it a bonding opportunity (on steroids) before life changes in a major way for everyone in the family, furry members included.