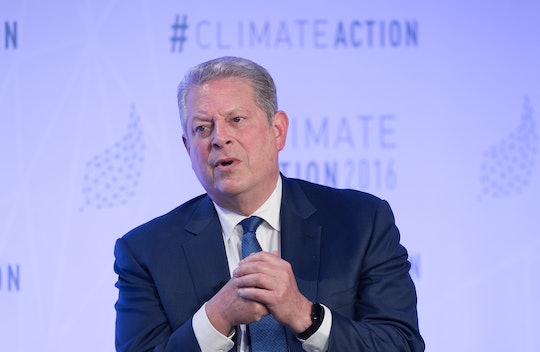 Throughout the final weeks of this year's election, Donald Trump has been embroiled in more than a few high-profile scandals, and he blames the media for negative dips in his poll numbers. He also has claimed that the election itself has being rigged by the media — not exactly a graceful manner with which to approach defeat. Trump's campaign manager Kellyanne Conway brought up Al Gore — who lost the 2000 election to George W. Bush — after Wednesday night's debate and attempted to make a comparison. But here's why Donald Trump and Al Gore are nothing alike when it comes to contested conventions.

When the final debate's moderator, Fox News' Chris Wallace, pointedly asked Trump if he would reject the results of the Nov 8. election if he loses, Trump said, “I’ll look at it at the time. What I’ve seen is so bad. The media is so dishonest and so corrupt and the pile on is so amazing.”

Wallace pressed him further, having not received a clear answer. Trump then added, “What I’m saying now is I will tell you at the time. I will keep you in suspense, OK?” The remark further fueled the internet's collective tizzy about the possibility that Trump would somehow protest his loss.

The idea that he wouldn't accept defeat was captured in a widely retweeted tweet showing the letter that George H. W. Bush — the first President Bush — left for his successor, Bill Clinton, when he left the White House in 1993. The letter demonstrates what it means to accept defeat, lose gracefully, and carry on what hundreds of years' worth of American presidents have done: honor and respect the democratic process.

When Kellyanne Conway name dropped Al Gore after the debate, she was alluding to the infamous recount that happened during the 2000 election. Conway was, trying to imply that a recount was the result of Gore's unwillingness to accept his narrow loss to Bush — something that many believe because Gore had actually conceded to Bush, then recanted a few hours later, when a recount was called for in the state of Florida, according to the New York Daily News.

The recount was not called for, however, because of "conspiracy theories" or claims that the election was rigged. Nor was it called for by Gore, specifically. Neither Gore nor Bush had ever engaged that kind of rhetoric throughout their campaign, and it was only because of an extremely close margin of votes between the two candidates that the recount was initiated.

The concern wasn't that the 2000 election was "rigged," but rather, that the votes could have been incorrectly counted by machinery. It didn't help that the media had also attempted to call the results of the election without realizing that Florida's polls had not yet closed.

The conclusion that the Bush-Gore election was "rigged" — a conclusion that Conway and other Trump supporters have been trying to propagate in order to defend Trump's stance — actually came after the recount in 2000. Some Democrats were suspicious of the outcome not just because of the Supreme Court's ruling, but because Gore had actually won the popular vote. Though, in the end it didn't matter much because Bush did have the number of electoral votes needed to win.

What should be remembered here is that, despite the fact that the Democratic Party had questions about the decision, Gore ultimately accepted the loss without challenging it and Bush became president — by just 537 votes.

“I accept the finality of the outcome, which will be ratified next Monday in the Electoral College," Gore said in his statement back in 2000, according to Politico. "And tonight, for the sake of our unity as a people and the strength of our democracy, I offer my concession.”

Trump, on the other hand, has been promoting suspicion of the media, the democratic process, and the political system in general in the U.S. throughout his campaign — the intention of which is not to strengthen democracy and unity, but to undermine it. In the end, comparing Gore and Trump is like comparing apples and oranges.