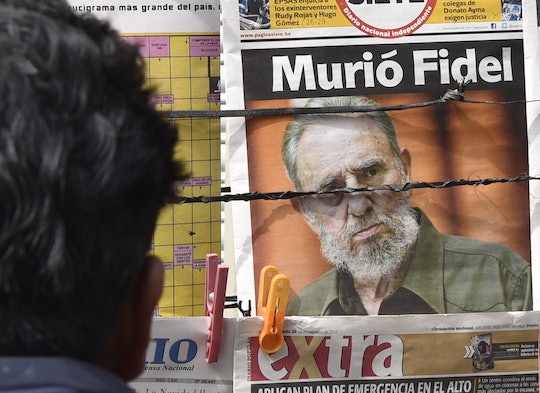 Why Donald Trump's Tweet About Fidel Castro's Death Is Not OK

One of the world's most divisive leaders, Fidel Castro, died Friday night at the age of 90. Responses to his death, both from other world leaders and the public, have varied from grief to celebration. The reaction from the United States' next president has prompted mixed reactions, too. Given that he's now the representative of the U.S. to the rest of the world, here's why Donald Trump's tweet about Fidel Castro's death is not OK.

Castro was Cuba's president for nearly fifty years, having come into power in 1959. Several years ago when his health took a bad turn, he passed leadership to his younger brother, Raúl — who has said he will step down in 2018.

Opinions of Castro — both from those under his rule and those who observed his power from outside Cuba — varied greatly throughout his life. Many saw him as an oppressive dictator, who suppressed free speech and executed thousands of his political opponents. Other saw him as a revolutionary who used his power to advocate for the poor. Among the world's political powers, U.S. presidents have (at least since the Kennedy Administration and the Cuban Missile Crisis) always kept tabs on Castro and relations with Cuba have shifted with each administration.

Under the Obama administration, restrictions on travel to Cuba were lifted for the first time since the Cold War, and Obama became the first sitting president to visit Cuba since before World War II. As Americans look ahead to the incoming Trump administration, they took to Twitter the morning after Castro's death to see how Donald Trump would react — and his tweet was typical for Trump, but lacking for a soon-to-be-president:

Trump is known for his often punchy, off-the-cuff tweets, but now that he's going to be president, many have wondered how he would present himself to the American people in times of crisis, or represent the nation in world events. The death of Fidel Castro was expected to bring up tensions from world leaders with whom Cuba had complicated relations — and even from within Cuba, which was also divided on his rule.

But for Trump, who is only in the earliest phases of creating relationships with other nations that will define the next four years of his presidency, the death of such an iconic and controversial leader was no time for flippant tweets. While it's fair to say no one expected Trump to deliver some well-crafted speech on Castro, it would have certainly behooved him (and the American people) to muster up something a little more nuanced than "Fidel Castro is dead!"

The responses to Trump's tweet were immediate — as is usually the case these days — and continue to add to the already well-stoked fire of anxiety around what a Trump presidency will look like. While there were some who applauded him for being rather succinct about the situation, the tone of the tweet arguably befits a media mogul more than a president.

To be fair, Trump was not the only leader in the western hemisphere to have his reaction lambasted: Canadian Prime Minister Justin Trudeau delivered a statement wherein he called Castro a "legendary revolutionary," according to the Toronto Star — an appraisal that garnered criticism from Canadians and those abroad. Trudeau's father had been a close friend of Castro's. Castro had, in fact, been named an honorary pallbearer at Trudeau's father's funeral in 2000.

While commenting on a contentious historical figure like Castro would be difficult for any leader, Trump's comment (more of a stating of the obvious, if anything) doesn't quite meet the bar of responsibility for the next leader of one of the most powerful countries in the world — which happens to have a very complex history with Cuba, of which Trump should be made aware.

It begs the question: are these remarks what we can expect from Trump over the next four years when he must address the people of the U.S., or those all over the world, in trying times? Can we expect 140-characters-or-less responses to history-making moments in lieu of carefully considered comments that inspire, comfort, and reassure the American people and the world? Only time, and Twitter, will tell.