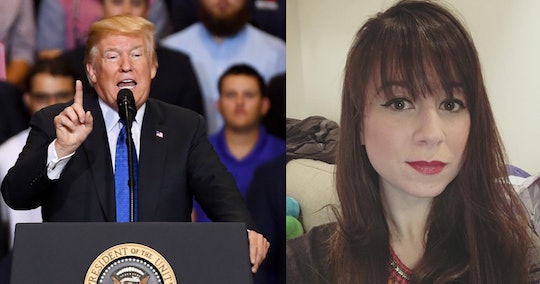 On Friday morning, the president of the United States sent a series of tweets questioning Christine Blasey Ford, the woman accusing Supreme Court nominee Judge Brett Kavanuagh of attempting to rape her at a high school party in 1982. (Kavanaugh has denied the allegations). Among the president's claims — which included the promise that Kavanaugh has an "impeccable reputation" and the allegations are an assault by "radical left wing politicians" — was a question that has been brought up countless times since Dr. Ford came forward: why didn't she say something sooner? So, why don't sexual assault victims report their abuse right away? It should come as no surprise that a president accused of sexual assault and harassment by over 16 women, and who bragged about sexual assault on tape prior to being elected to the highest office in the country, wouldn't understand why victims refuse to come forward. And while he may not take this opportunity to shut his mouth, listen to victims, and learn, it's up to the rest of us to debunk the idea that coming forward is somehow an "easy" or even, in many cases, safe thing to do.

Out of 1,000 rapes, 994 of the perpetrators will go free, according to the Rape, Abuse, & Incest National Network (RAINN). And out of those 1,000 rapes, only 310 victims will come forward and report their assaults to the police — two out of every three rapes go unreported in the United States.

Of course, the reasons why a victim would choose not to report their assault are as varied as the victims themselves and the variables surrounding their assaults, but according to RAINN there are a number of universal reasons why so many of us decide to stay silent, including: fear of retaliation, the belief that the police wouldn't, or couldn't, do anything to help, and the feeling that the assault wasn't important enough to report.

Even when survivors come forward and endure hour-long rape kits, hours upon hours reliving their assaults to provide statements to the proper authorities, allowing their body parts to be photographed by forensic photographers while their clothing is bagged and categorized after they've endured a pelvic exam, the evidence collected from their bodies sits untouched, collecting dust and indifference.

It's even more difficult for Black women and women of color to come forward and report their assaults, especially since systemic racism still percolates the law enforcement community. In 2016, the Department of Justice released a detailed report of the Baltimore City Police Department's horrific treatment of sexual assault victims, that "disproportionately harmed Baltimore's African-American community and eroded the public's trust in the police." According to the report, outlined by Rolling Stone, one officer asked a victim why she was "messing up that guy's life" after coming forward, and an officer in the sex crimes unit said "all of our rape cases are bullshit."

It's no wonder, then, that for every Black woman who reports her rape at least 15 do not, according to the Connecticut Alliance to End Sexual Violence.

The 2016 report also uncovered a harrowing reality that plagues the entire country's police departments: in four years, between 2010 and 2014, only 15 percent of the rape kits collected by the city were processed. According to End The Backlog, there are at least 225,000 unprocessed rape kits sitting in police departments across the country. Even when survivors come forward and endure hour-long rape kits, hours upon hours reliving their assaults to provide statements to the proper authorities, allowing their body parts to be photographed by forensic photographers while their clothing is bagged and categorized and after they've endured a pelvic exam, the evidence collected from their bodies sits untouched, collecting dust and indifference.

After Audrie Pott was sexually assaulted by three classmates, and naked pictures of her were posted online, harassment became so pervasive that she died by suicide.

These factors undoubtably impact high school students, too, who simultaneously endure additional barriers to justice if they're assaulted and decide to come forward. In the United States, 58 percent of 7th - 12th graders have experienced sexual harassment, according to a 2014 report by Aljazeera America, and 44 percent of sexual assaults take place before the victim is 18. According to the Centers for Disease Control and Prevention (CDC), one in five female high school students have experienced dating violence, and 30 percent of female rape victims were first raped between the ages of 11 to 17. From fearing retaliation from their parents, to worrying about possible charges if underage drinking was involved, to living in a culture that often defends accused rapists, especially if they're well-known student-athletes or prominent members of the community, students are rarely supported in a way that helps them come forward and report their assaults.

The 2013 two high school football stars were found guilty of raping an unconscious 16-year-old girl at a party, after taking pictures and video of the incident and then sharing them with friends and classmates. But prior to the conviction the community, and the rapists' football coach, rallied around the accused and not the victim. Per The New York Times, during the trial "testimony also touched the high school’s football coach, Reno Saccoccia, who had been criticized by some in the community for not doing more to discipline other players present."

And after Audrie Pott was sexually assaulted by three classmates, and naked pictures of her were posted online, harassment became so pervasive that she died by suicide. A barrage of bullying by classmates, and a lackluster response by the school, the authorities, and her community, contributed to her untimely death. Her story is but one of many, and a harrowing representation of what high school students might face if they share their stories.

And now that Secretary of Education Betsy DeVos is proposing changes to Title IX that would make it even harder for victims to come forward and be supported by their universities, students of all ages are likely to face even more difficulties if they do, in fact, come forward.

These facts are not difficult for anyone, including the president, to find. In fact, he could log back on Twitter and read the hashtag #WhyIDidntReport.

The stakes are arguably even higher for women who come forward against men in positions of extreme power. Tina Johnson, who accused former-GOP Senator Roy More of sexually assaulting her in 1991, had her home destroyed by a fire. The Etowah County Sherrif's Office were investigating possible arson, but claimed there wasn't a link to the Moore allegations. And now that Dr. Ford has come forward she has been receiving death threats, has had to take a leave of absence from her job as a psychologist, has hired private security, and has moved out of her home and gone into hiding with her family.

These facts are not difficult for anyone, including the president, to find. In fact, he could log back on Twitter and read the hashtag #WhyIDidntReport. Victims from across the country are sharing why they chose to remain silent; some for days, months, years, and decades. But a man who allegedly said when faced with sexual assault allegations "you've got to deny, deny, deny and push back on these women" isn't going to listen to victims because he doesn't care about them. Instead, when possible, he uses them to gain political points or casts them as vindictive women who, per the president, "aren't pretty enough for him to assault."

But the facts remain: there are numerous reasons why victims choose not to report their assaults, and that choice says more about a system that continuously fails sexual assault victims than the victims themselves. Until we do better by victims — until we believe women — we will all remain shackled by a culture of complicit silence.