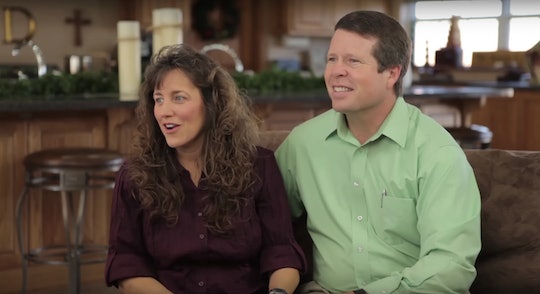 Here's Why Some Of The Duggars Don't Have Instagram

Fans of the massive and ever-expanding Duggar family have made a habit of learning all about its members' lives for years, first by tuning into the now-cancelled TLC hit 19 Kids and Counting, and now by watching its spinoff Counting On. But even such addictive reality TV shows must at times take a season hiatus, or at least a commercial break. And when that happens, fans generally can still get their Duggar fix by checking out what some of of the fam is up to on Instagram. Still, some of the many kids remain more of a mystery when the cameras aren't rolling, because some of the Duggars don't actually have Instagram accounts — or any obvious connections to social media. So, what gives?

Well, it turns out that the ultraconservative Duggar parents, Michelle and Jim Bob, actually have some pretty strict rules about social media for their giant brood. That's literally 0 percent surprising, considering the fact that family rules reportedly prohibit alcohol, dancing, celebrating Halloween, and going to the beach (because of the temptation of all those scantily clad bodies of course), E! News reported.

And that's not even to mention the unyielding rules that apply to interactions with those of the opposite sex: Parents are supposed to be included on all texts, all dates must be chaperones during a "courtship," hand-holding is supposed to wait until engagement, and first kisses — let alone any other physical intimacy — are reserved for marriage, according to E! News.

So, of course it would have to be a little bit more of a thing for any of the Duggars to hop online and set up a Facebook, Twitter, or Instagram. The older Duggar kids, who are in their 20s now, surely never had the chance to chat with their classmates and strangers alike using their AIM accounts in middle school — nope, they were all homeschooled, with access to TV and the internet extremely limited and always supervised.

So, at least for the Duggar daughters, their first experience with the joys of cultivating a ~*persona*~ on the world wide web would have been when they got engaged, according to AOL. And as The Hollywood Gossip speculated, the reason for the ban "has to do with the possibility that they'll end up accepting a friend request from the Devil, who will then bombard them with requests for nudes."

That's a bit dramatic, of course, but the sentiment that the Duggars have their rules to help their kids resist temptations and to maintain their "purity" stands. The obsession with modesty is why the unmarried girls are allowed to wear only long skirts and never pants, after all.

There is some indication that the rules may be a little more lax for the Duggar boys, though. According to In Touch Weekly, for example, Jill and Jessa Duggar set up their Instagram accounts when they got engaged; Jeremy did so after he was married. Josiah Duggar, on the other hand, started Instagramming when he entered into a courtship (the Duggars' conservative form of dating) in 2105. Then he took a significant hiatus from posting when he courtship ended without his having put a ring on it.

Despite what seems to be some slightly inconsistent enforcement of this rule, it's an enduring one: The oldest two Duggars, 27-year-old twins Jana and John-David, are both neither married nor engaged, and they do not appear to be on Instagram.

So, it's safe to say that fans won't be seeing too many of the single Duggars tweeting or posting anything on Instagram. Just like holding hands, it's a privilege that must wait for engagement.