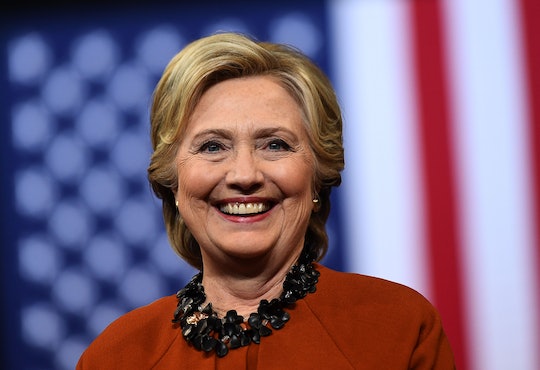 On Friday morning, #DraftOurDaughters began trending on Twitter after a June interview with Democratic candidate Hillary Clinton re-emerged and began making the rounds online. In it, Clinton expressed support for the 2017 National Defense Authorization Act, which would require women to register for the draft. (The bill was passed soon after Clinton's interview, with plenty of support from both Republicans and Democrats in the Senate.) Now, supporters of Republican nominee Donald Trump are using Clinton's support of the bill to criticize her — but the #DraftOurDaughter jokes and tweets making the rounds are both uninformed and incredibly misguided.

In the actual Huffington Post interview, Clinton was asked about her opinion on legislation mandating that women register for the draft. "I do support that," Clinton responded. Cue the #DraftOurDaughters explosion (albeit four months late to the party).

However, the United States has operated with an all-volunteer military since 1973, and that's not something Clinton wants to change, a fact that #DraftOurDaughter tweets have willfully ignored. "I am on record as supporting the all-volunteer military," Clinton said during that same Huffington Post interview, "which I think at this time does serve our country well."

It's a view she's held for awhile, as well. In February, at a town hall forum in New Hampshire, Clinton explained, according to a YouTube video:

From my perspective, the all-volunteer military has worked, and we should not do anything that undermines it because it has provided a solid core of people who are willing to serve our country. The idea of having everybody register concerns me a little bit, unless we have a better idea of where that's going to come out. ... I have a hard time imagining the kind of national emergency that would require the use of the Selective Service system.

To me, that sounds like a perfectly rational, gender-equal approach to a country's military, and one that's not being taken into consideration in these #DraftOurDaughter tweets. If you look at the images being used, there's several massive errors to them. First of all, since when does the draft mean a child militia? Second, since when would a mother on maternity leave be sent to war? (Paid maternity leave in the military currently sits at 12 weeks, according to The Washington Post.)

Third, how can we ask only half of our population to sign up for the draft? That's entirely unfair to men across the United States, and asking women to do the same proves that feminism is a force that helps both genders. Daughters are not anymore fragile than sons, and having to watch either go to war would be an excruciating experience for parents. As history professor Ruth Ben-Ghiat wrote for CNN, "Equal rights brings with it equal duties. ... Selective Service registration should be no different."

The other important argument to take into consideration here is that Clinton does not support the draft — and 80 percent of Americans agree with her, according to a Gallup poll. The all-volunteer military has worked well for Americans, and the military offers plenty of job benefits to those who sign up for it. Very few people actually want to send unwilling people to war, and barring a disaster, that's unlikely to change.

However, if it does, it makes sense that a gender-equal society would send both men and women (and, unlike some of the #DraftOurDaughters tweets would have you believe, they would all be fully-grown adults) to defend the country.