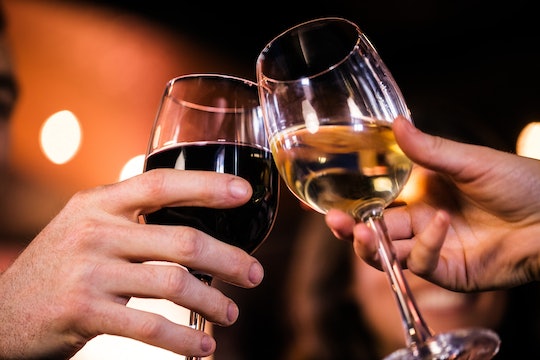 Study: Drinking Two Glasses Of Wine A Day Is Good For Your Mind — Here's Why

There’s more scientific proof that a daily drink or two isn't necessarily a bad thing and could have a place in an overall healthy lifestyle. A new study out of the University of Rochester Medical Center (URMC) in New York found that — in mice, at least — a daily glass or two of wine is actually great for brain health. According to the researchers' findings, mice who indulged in a low to moderate amount of alcohol daily showed improvements in the systems responsible for helping the brain to clean itself. While the study authors said that the effects may look different in most humans, the report is one of several recent studies proving that alcohol — in moderation — can actually be a good thing.

Of course, any discussion about the effects of daily drinking has to begin with a reminder of the enormous risks to physical and emotional health that go along with heavy drinking. The World Health Organization links alcohol abuse to some 200 health conditions and more than 3.3 million deaths each year, worldwide. Additionally, the Centers for Disease Control and Prevention also warns that excessive drinking can lead to chronic health problems including cirrhosis of the liver, various forms of cancer, and high blood pressure. And of course, drinking while pregnant can do serious harm to a developing infant.

But studies on the potential health benefits of drinking low to even moderate amounts of alcohol on a regular basis have gone on to produce far more positive results. According to the Mayo Clinic, for instance, having one or two drinks a day has been shown to lower the risk of diabetes and improve cognitive functioning. Previous studies have also concluded that drinking up to two glasses of red wine a day can help antioxidant levels and protect heart health. And this latest study, published in the journal Scientific Reports earlier this month, builds on this existing research.

In regards to the new research, lead study author Dr. Maiken Nedergaard, of the Center for Translational Neuromedicine at URMC, and colleagues explored the potential benefit alcohol may provide to the glymphatic system, a recently discovered pathway for eliminating waste from the central nervous system. It also helps keep adequate levels of glucose, lipids, and proteins flowing through the brain and nervous system for optimal functioning.

Here's what the researchers found: High doses of alcohol seemed to increase inflammation of the system, but exposing mice to low amounts of alcohol seemed to give the cells that make up the glymphatic system an unexpected boost in functioning — outperforming those found in the “healthier” control group.

Exactly what did the researchers consider “low” levels of alcohol exposure in mice? According to the study, the mice were given the equivalent of 2.5 glasses of wine per day. That may seem like a lot, considering the CDC guidelines for alcohol consumption in adults (a safe level of alcohol for adult women is no more than one drink per day and no more than two per day for men).

The one-glass-a-day rule is also the upper limit of what the National Institute on Alcohol Abuse and Alcoholism recommends for reducing the risk of alcohol dependence or addiction. The URMC findings would seem to almost triple that recommendation, coming very close to the definition of binge-drinking (according to the NIAAA website): having more than four or five drinks within a few hours for women and men, respectively.

But the study authors told Newsweek that their findings didn’t mean that readers should make a habit of reaching for that third glass of wine. Nedergaard told the publication that her team's findings were actually much closer to the CDC guidelines, considering the differences in how humans and mice metabolize alcohol, explaining:

Of course, we cannot say anything about humans because mice are different. They have a much faster metabolism. If anything, it should be a lower amount in humans.

Overall, she continued, light drinkers would likely find the results very encouraging. “Except for a few types of cancer, including unfortunately breast cancer, alcohol is good for almost everything,” Nedergaard told Newsweek. On behalf of all wine drinkers, I'll say cheers to that.

Still, there’s no question that heavy drinking is dangerous on multiple levels. So much so that, if you’re not already a drinker, none of the potential health benefits is a good enough reason to start. There are plenty of other ways to boost cardiovascular and brain health that don’t risk the litany of health problems and possible dependence or addiction concerns that come with daily alcohol use.

But for those of us who look forward to a glass or two at the end of a hard day, well, the good news is that science — for the most part — says your brain will be just fine.

More Like This
Does The FDA's Plan To Limit Lead In Baby Food Go Far Enough?
14 Recipes For Sick Kids When Everyone's Tired Of Canned Soup & Crackers
What Foods Fight Nausea During Pregnancy?
Doctors Swallowed LEGOS To Prove Everything Is Awesome For Kids Who Do The Same
What Parents Are Talking About — Delivered Straight To Your Inbox