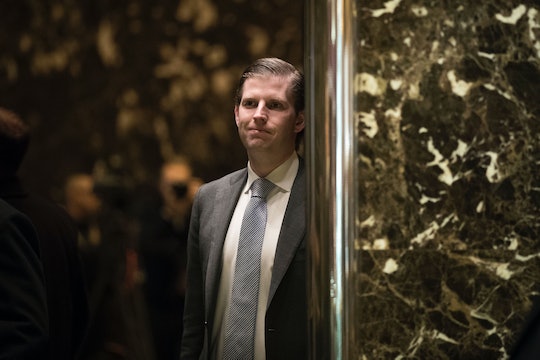 I'm not a big fan of name-calling, so when former Secretary of State Hillary Clinton made her unfortunately-worded "basket of deplorables" comment regarding a portion of Trump supporters last fall, I was a little uncomfortable, even if I did understand and agree with the intended message. But compared to Eric Trump's dangerous comment on Democrats, Clinton's "deplorables" pale in comparison. Clinton, by her own admission, was being "grossly generalistic" when she said that "half of Trump's supporters" were "racist, sexist, homophobic, xenophobic, Islamaphobic," while the other half were "just desperate for change," according to PolitiFact. But some people are arguing that Trump's could be used as justification for murder. The Trump Organization did not immediately return Romper's request for comment.

Alongside his brother, Donald Jr., Eric Trump currently runs the Trump Organization in order to keep it separate from the presidency. Yet still, he appeared on Fox News on Tuesday night to complain about how Democrats "try and obstruct a great man" and his family. "To me, they’re not even people," Trump told host Sean Hannity. "It’s so, so sad. Morality’s just gone, morals have flown out the window." Regardless of his grievances with one-third of Americans, dehumanizing them is a slippery slope, indeed. Early Wednesday morning, behavioral scientist and writer Caroline O. wrote as part of a series of tweets, "I'm not insinuating that Eric Trump is promoting genocide. But dehumanization is the [third] of [eight] stages of genocide."

Caroline O. was referring to a brief by Dr. Gregory Stanton, a law professor and descendant of Elizabeth Cady Stanton who's known for his work in genocide studies. Stanton has served in the State Department, and is the founder of Genocide Watch. His paper, since updated to "Ten Stages of Genocide," explains how societies follow a predictable path toward atrocities against their fellow man. If you've ever heard stories about the Holocaust, the Khmer Rouge, or modern-day Syria and wondered how people could sink so low, Stanton's paper outlines the steps succinctly. Step one is classifying a group to distinguish "us and them." Voter registration has already conveniently allowed Americans to classify themselves. Step two is symbolization, like the yellow star. If you've seen triple-parentheses around a Twitter user's name, or the addition of "Deplorable" to a handle, you'll see that's been taken care of, as well.

Of course, Trump didn't actually call for the mass extermination of his father's political opponents. "But Eric Trump's motives don't really matter," Caroline O. continued. "His words [and] actions do. And he's providing justification for violence."

Trump has painted his enemies as subhuman, just like Pol Pot and Adolf Hitler before him. And we've seen countless examples of the senior Trump inciting violence and inspiring hate crimes without specifically ordering such acts. With three more of Stanton's boxes already checked off (discrimination, organization, and polarization), extremists are now primed for step seven, Preparation, also known as planning the Final Solution. The Trump family would be well-advised to mind their words carefully from here on out.