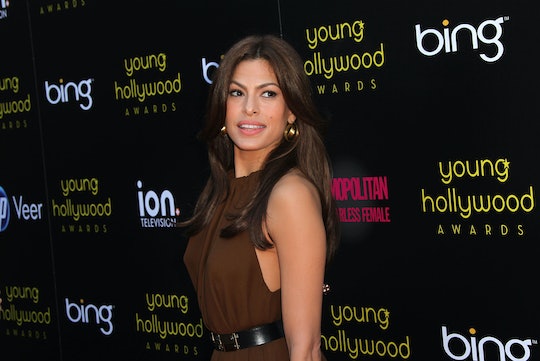 Here's What Changed Eva Mendes' Mind About Having Kids

Some women seem to have their lives ultra-planned out, settling down early and practically starting a 401K in the womb... Then there's the less planned-out person, the one who ends up changing their minds on things in a way that leaves friends and family surprised. Actress, designer, and mom Eva Mendes is clearly more the learn-she-as-goes type, and this makes her relatable as far as huge celebrities married to other big stars go. A new interview reveals Mendes changed her mind about having kids only after meeting partner Ryan Gosling.

That's such a refreshing confession, considering that motherhood is often looked at as predestined for females, at least by some segments of society.

But Mendes was an acting veteran by the time she met Gosling on the set of The Place Beyond the Pines, and had already a whole life and career of her own. Being on magazine covers and starring in movies shooting all over the world, settling down "was the furthest thing from my mind," she told Women's Health.

All that changed, however, when she got serious with Gosling, who, as People noted, she started dating around 2011, after the two were spotted at Disneyland together, and with whom she seems to share a belief in privacy. (The two are rarely photographed together, as a scan of the Internet shows, and there weren't any pictures of their kids to be found on social media.)

Clearly, Mendes views her relationship as something special not to be commercialized... which makes her quotes to Women's Health make all the more sense. "Ryan Gosling happened," she joked to the magazine when asked about her life plan. "I mean, falling in love with him. Then it made sense for me to have… not kids, but his kids. It was very specific to him."

Omg, that's almost as romantic as Gosling's character in the ultimate chick flick, The Notebook, the fact that meeting someone so totally turned Mendes' ideas — and life — around.

Now, the star, mom to Esmerelda and Amada, according to Women's Health, added that her acting ambition seemed to have dimmed with raising young kids (although she does seem psyched about her moderately-priced clothing collab with New York & Company).

Whether or not the two lovebirds mean to be as secretive as they are — it was hard to discern which kid is which age, for example, with Harper's Bazaar finally confirming that Esmerelda is their 4-year-old and Amada is 2-year-old — this pair certainly sound adorable.

"I'm just so obsessed with my kids that I don't want to leave them. They're just still so little," the actress said in an interview with E! News, adding that "[the girls] live in jammies, you know. They're still in diapers — well, one of them's still in diapers, so they're just being babies as they should be." So cute.

The proud mama even skipped Gosling's big Golden Globes win for La La Land in 2017 to stay home with the kids, an event at which he thanked her clearly, though without using names, as Cosmopolitan reported.

She also tries to keep that separation between her Hollywood life and her home life. "They’ve never seen me get ready for something; they’ve never seen me at work," Mendes added to Women's Health. "Which is fine, for whoever wants to do it that way, but the way I keep it normal is by not letting them see me in these situations. I’m just Mom."

I love this star, and she really sounds like she has her priorities straight as far as what works for her family.

More Like This
Marie Kondo Gives Up Tidying Post-Kids, Sparking Joy For Moms Everywhere
10 Of Julia Louis-Dreyfus' Best Quotes On Motherhood & Raising Her Sons
Sally Field Is The Ultimate Cool Mom Who Once Tried To Set Her Son Up With An Olympian
Lisa Marie Presley’s Daughter Posted A Beautiful Throwback Photo With Her Late Mom
What Parents Are Talking About — Delivered Straight To Your Inbox