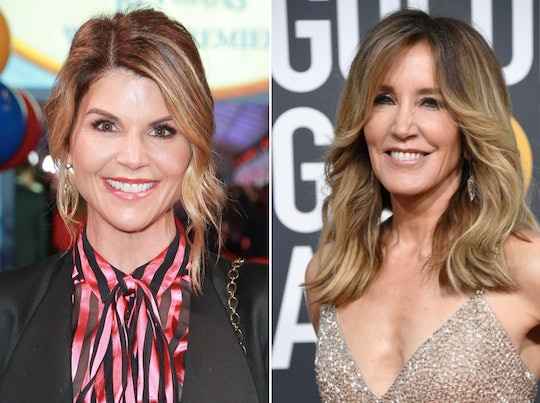 The FBI released an explosive, massive report on Tuesday, accusing wealthy parents — Hollywood actresses Lori Loughlin and Felicity Huffman, as well as CEOs, were among the 50 people charged — of participating in a college admissions bribery and cheating scheme, according to The Washington Post. As some were arrested yesterday, along with everything that's been revealed over the last 24 hours, many may be wondering if the parents reportedly involved, such as Loughlin and Huffman, will go to jail for their alleged involvement in the scandal.

Here's a quick refresher of what's happened if you're just catching up on this completely bonkers situation. According to NBC News, the Justice Department has charged 50 people in "a $25 million college entrance exam cheating scheme" that allegedly involved paying large sums of money to "[help] potential students cheat on their college exams."

As The Cut reported, Loughlin and her husband, Mossimo Giannulli, are accused of allegedly "paying $500,000" to man at the center of the scandal, William Rick Singer, to get their daughters into USC, posing as "recruits for the crew team." (According to People, neither of their daughters, Olivia Jade and Isabella Rose, have rowed.)

As for Huffman, she is reportedly accused of allegedly paying an organization $15,000 that "helped her daughter cheat on her SATs," according to NBC News. Huffman's husband, William H. Macy, has not been charged in the reported scheme, according to The Verge, and authorities have not said why.

Romper's request for comment from Huffman's rep was not immediately returned and a rep for Loughlin told Romper, "I don’t have any information at this time."

As CNN reported, officials say this the "largest college admissions scam ever prosecuted by the Department of Justice."

So, with all that said, if convicted, will these parents actually go to jail? As legal analyst Ari Melber for NBC explained to TODAY, it's unlikely, although they do "face real prison time for a felony."

"You could imagine if they cooperate this not being the kind of thing where the feds want to jail a bunch of parents,'' Melber told TODAY, adding, however, that feds "clearly are sending a message."

Meanwhile, legal expert James J. Leonard Jr. also explained to People that prison time is unlikely as they are parents.

As Leonard explained to People, "A custodial term is always a possibility when you are charged with felonies. The question to ask is if it’s a probability, and in this case I don’t see it as a probability with respect to the parents involved.” He added, according to People: "At the end of the day, we are talking about parents who tried to help their children... And crossed the line in doing so."

Additionally, Mimi Rocah, a former Assistant U.S. Attorney and current Pace Law Professor, explained to Law & Crime that jail time probably won't happen. While the factors involved in the case and "sophistication of the scheme" would typically equate to "facing jail time," Rocah told Law & Crime that "it will be within the sentencing Judge’s discretion as to whether to follow the guidelines or not and a lot of different factors will play into that."

Huffman was arrested on Tuesday, but has since been released on $250,000 bail, according to the Associated Press, and Loughlin was taken into custody on Wednesday, as The Cut reported. It seems there are still many moving factors within this alleged scheme and what happens will ultimately be up to a judge. But as legal experts have voiced, it seems unlikely that jail time will be a realistic outcome.