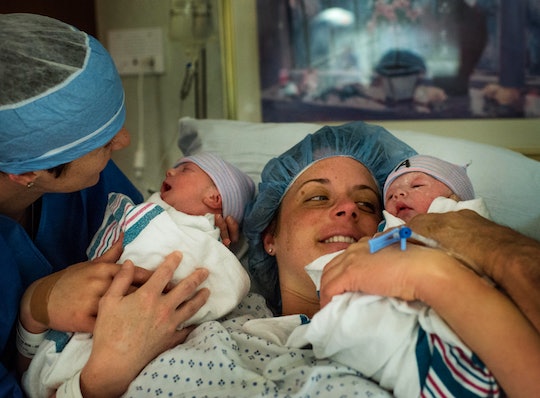 Why Fixing Second-Parent Adoption Is Such A Big Deal

The paperwork and exams started piling up the second Lora Liegel and her wife had a baby.

There was an interview with a social worker, a physical exam by a doctor, a meeting to demonstrate that Liegel and her wife could financially afford their baby, and more.

“The second-parent adoption process made me feel like I had to prove that I was good enough, that I was a good parent,” says Liegel, founder of Second Parent, a platform for LGBTQ parents.

Since the parental rights over a child automatically go only to the biological parent of the child, anyone without this bio-status needs to technically adopt their child. This is a second-parent adoption.

Many parents who have gone through second-parent adoption in New York say it’s a long, arduous process to adopt their own child, but this may be about to change.

New York Gov. Andrew Cuomo's recently proposed legislation to legalize surrogacy in New York has renewed debate, but a less publicized aspect of that bill intends to streamline the second-parent adoption process. Under the new law, couples would make a single visit to court to file for parental rights while the child is in utero.

Currently, it could take couples about a year to go through all the steps in New York, which include lawyer fees, court fees, and fees for a mandatory social worker home visit. These fees add up to more than $5,000.

Parents must also provide a letter stating their salary, a letter from their doctor, a list of every residence they’ve lived in for the past 28 years, relevant financial information, and fingerprints. Plus, each state has its own way of determining parentage, making second-parent adoption even more complex — often, attorneys aren’t totally up to date with all the ever-changing laws, Liegel says.

In comparison, in California, the second-parent adoption consists of a $10 fee plus a one-page online form.

In Washington D.C., the law is similar to New York’s current law, and couples need to do a home study, blood work, fingerprinting, a physical, and more.

It’s a complicated issue, made more confusing because the process varies from state to state and is different when there’s a heterosexual relationship versus a homosexual relationship, says Melissa Brisman, reproductive attorney in Montvale, New Jersey.

There is little history or any uniformity in applying the marital presumption in a gender-neutral way to same-sex marriages.

There are statutes in some states relating to conception via assisted reproductive technology (ART) that set forth certain presumptions when a child is born into a heterosexual marriage, she says.

For example, in New York, if a woman is married to a man, the presumption is that the child she births is genetically hers, and also genetically that of her spouse — even if donor eggs or donor sperm were used to conceive the child. This is known as “marital presumption,” Brisman says.

But “there is little history or any uniformity in applying the marital presumption in a gender-neutral way to same-sex marriages,” she explains.

So without adopting the child, you can’t legally guarantee that the non-genetic parent would be recognized in the same-sex marriage.

There are also states that don’t have any statutes relating to conception through ART, and in these states, a marital presumption for heterosexual couples or same-sex couples doesn’t exist.

If those couples separate or divorce, there’s a risk to the non-genetic parent, even if his or her name appears on the child’s birth certificate.

“Because second-parent adoptions are onerous and expensive, many couples having children through assisted reproduction fail to obtain a court order securing their legal relationship to the child,” says Denise Seidelman, a partner at Rumbold & Seidelman in Bronxville, an adoption law firm in New York.

Seidelman says there have been a number of cases in New York and across the country where this has resulted in contentious litigation between the couple over the second parent’s right and obligations to the child.

“There are dozens of different ways you could lose your child if you do not have an adoption or court judgment, and I think I’ve seen them all,” says Nancy Baker, family law director and managing editor of Child Mode. “Yes, it is wrong that you have to adopt your own child, and I have devoted my career to working for the day when that will not be necessary, but we are not there yet, and we have to protect our children in the meantime.”

Top image caption: The Bryans, married in the District of Columbia, are having their twins in the District, which allows them to both be recognized as legal parents of their daughters, a status they could not achieve in Virginia.

More Like This
What NICU Means & What To Expect From A NICU Stay
I’m Getting Dual Citizenship For My Jewish Children, Just In Case.
Here's How To Keep Your C-Section Incision Dry
30 Girl Names That Start With “T”