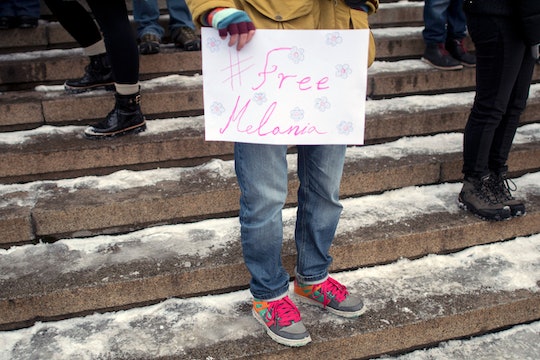 During the Women's March on Washington on Saturday, there were a number of fantastic signs held up in the crowd, and they ranged from witty to hard-hitting to fierce. But one sign, which was spotted a number of times and made several "best signs" lists, was probably not in the best taste. While it may not be apparent at first glance, "Free Melania" signs at President Trump protests are actually fairly misogynistic and insensitive to women who have actually been in abusive relationships, even if they seem humorous or lighthearted at first.

First of all, we don't actually know anything concrete about Melania and Trump's relationship. Without anything to hint at the fact that Melania is in an unhappy or troubled relationship, saying "Free Melania" ignores the fact that Melania is a person who is perfectly capable of choosing her situation for herself. Calling for Melania's freedom when she, by all accounts, chose her current situation herself and has expressed no discomfort in her relationship assumes a lot about the Trumps and Melania. Assuming that Melania is abused or labeling her a victim invades her privacy and discredits her ability to make decisions for herself.

On top of that, if Melania were someone in an abusive relationship, making light of it, shining a spotlight on her, or using her situation as a way to protest her husband wouldn't be an effective way to help her actually leave. Experts warn that you should never pressure someone to leave their abuser. Instead, listen to and support a survivor, and provide resources if needed. You don't know anyone's situation as well as they do, nor are you an expert in what they need. (Of course, no one is implying that this is the case — but it's important to remember hypotheticals in instances like this.)

On top of that — and perhaps more importantly — the #FreeMelania signs are also insensitive to actual abuse survivors' experiences. There are women (and men) out there who are experiencing very real, unambiguous abuse at the hands of their partners, and making light of domestic abuse only reinforces the kind of sexist culture that allowed a man accused of sexual assault by several women to become president of the United States. (Trump has repeatedly denied all allegations.) And while domestic abuse certainly isn't limited to women of a certain income bracket or background, women of color and women who live in poor neighborhoods are far more likely to be victims of domestic violence, according to Mic. Calling to free the very rich, very privileged first lady of the United States from an assumed troubled relationship seems to ignore the very real plight abused women face on a daily basis.

Let's focus our efforts to dismantle domestic violence where they belong. While #FreeMelania signs might earn a chuckle or two online, no one truthfully knows anything about Melania and President Trump's relationship, and the #FreeMelania signs ignore, whether they intend to or not, the plight women who truly are survivors of domestic abuse endure each day. There are a great many reasons for people to protest against Trump — let's stick to ones that are backed by facts and help survivors, rather than undermining their experiences.