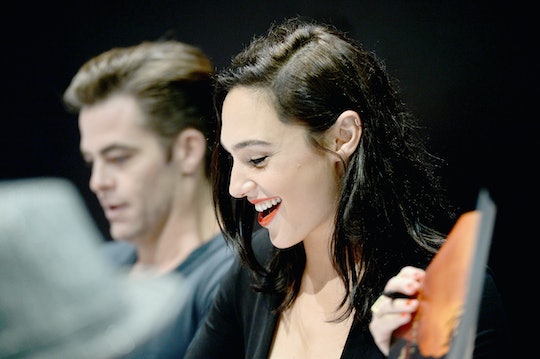 Wonder Woman actress Gal Gadot may not actually be a superhero in real life, but honestly, these days, it's kind of hard to know for sure. During its opening weekend, Wonder Woman topped the box office, and the continued interest in Gadot also helped the film become the most-tweeted about film in the United States this year, according to Variety. The intense physical nature of the film quickly made it clear that Gadot is a total badass, but if that weren't enough, she was also pregnant during much of the filming. That's been hailed as majorly impressive (and it is), but the truth is that Gal Gadot hiding her pregnancy isn't necessarily a "win" for women, as cool as it is that she was able to actually do it.

To be clear, pretty much everything about Gal Gadot and Wonder Woman's overall success is important. By making the film, director Patty Jenkins finally put to rest the long-held myth that audiences just don't want to see female-led superhero films, and in doing so, she also helped the film set a record for being the most successful female-directed film ever, according to The Guardian. If that weren't enough, Jenkins also scored the highest-ever budget for a female-directed film ($150 million), and totally delivered — which will no doubt help advance all female directors, who are largely underrepresented in Hollywood. And by taking the lead role in the film and completely rocking it? Gadot proved that a woman can absolutely carry a film in a largely male-dominated genre, while also giving an entire generation of girls the chance to grow up seeing a strong woman represented on screen (no big deal).

Not long after the film's premiere though, Jenkins revealed that during reshoots of the film, Gadot was actually five months pregnant with her second child. The director praised Gadot's tireless worth ethic to Entertainment Weekly and said,

She’s pregnant during part of the movie, in a suit out in a field in the freezing cold in others. There are so many things we asked her to do: Now do it on one foot. Now shout while you’re doing it. Now it’s raining in the freezing cold and you’ve lost your voice, go. Everyday it was a hilarious gauntlet and she would do it.

At that point, Gadot's pregnancy was visible enough that it had to be accommodated by lots of creative costuming, camera angles, and post-production tweaks. But in a cover story for Marie Claire's June 2017 issue, the actress revealed that, she actually worked very hard to keep her pregnancy a secret earlier on, specifically because she was worried about what would happen if she didn't.

Gadot told Marie Claire that she “feared special treatment” and that she wanted to avoid “advertising anything that could be considered weakness.” But it wasn't just the perception of weakness she wanted to avoid — Gadot also admitted that during filming, she suffered from "hormone-induced migraines" and that she would literally end up vomiting “discreetly in corners” due to morning sickness. She explained,

I gutted it out. I started to come to set with sunglasses. I had this jug of water with huge pieces of ginger. One of the producers kept on asking, 'Why are you drinking that potato water?' They thought I'd gone Hollywood.

You don't have to have ever been pregnant to know how awful that must have been, and, in all fairness, Gadot herself doesn't seem to too bothered by it looking back. Part of that, presumably, is that she really is tough: the Israel-born actress spent two years in the Israeli Defense Forces, and served during the 2006 Israel-Hezbollah War in Lebanon and northern Israel, according to Vogue. She also spent six months training six hours per day for her role in Wonder Woman, according to People, and managed to pack on an impressive 14 pounds of muscle as a result. It might have also helped that Gadot considers herself to be very competitive — she told Marie Claire "there is a part of me where everything is full-gas, achieving, wanting more."

In other words, Gadot's decision to hide her pregnancy sounds like one that made sense for her, and that pushing through challenges is something she does quite well. But that also doesn't change the fact that, ultimately, Gadot is right: no matter how strong or focused or capable she was and continues to be, she probably would have faced special treatment if she hadn't hid her pregnancy, and she probably would have been viewed as unnecessarily weak.

After all, it's not just a problem faced by movie stars in superhero films. Determining when to reveal your pregnancy to your employer is a common conundrum that weighs on women's minds all the time, and for good reason: it's not uncommon for women to describe being passed over for promotions or coveted projects at work because of their pregnancies, according to The Independent, or because they have young children. And the lingering idea that women are, in general, less dedicated to their careers if they are mothers has translated into a very real "motherhood penalty" that places women at a disadvantage compared to their male counterparts.

As Katharine Zaleski, cofounder of the tech recruiting company PowertoFly explained to NBC News in February,

A lot of women feel like, if they don't keep [their pregnancies] under wraps, they’re going to get taken off projects that they'd been spending months, if not years working towards ... [They are] cut out of the conversation.

Gadot may not have necessarily been worried about losing her role in the film, but given how hard she worked for years to get this far in her career — not to mention how much criticism the film had to endure prior to its release from naysayers who assumed it could never do well — it's no surprise that she didn't want anyone using her pregnancy against her, or judging her unfairly for it.

Besides being an actually-good movie, Wonder Woman has done so much to open up the conversation surrounding women in powerful roles — both literally and figuratively. The film has shown that you can in fact make a movie about a woman superhero and people (both men and women) will pay big bucks to come see it. It's shown that, oh hey, female directors might actually be good at their jobs, and maybe they should be given more opportunities. It's also proven that there is a market for strong female role models for young girls (and boys). All of this matters.

What could the message have been, then, if in addition to all of that, Gadot had actually felt like she was able to reveal her pregnancy, and that she could have been supported? What if she could have even been able to be pregnant on-screen — or at least if the entire crew didn't have to go to such great lengths to pretend that she wasn't? What if she didn't have to admit in interviews that she felt like being pregnant on-set felt like being weak, or that she felt like she had to suffer with brutal migraines and nausea as though nothing were wrong?

That might seem pretty radical, but the fact that it seems so out-there also seems like the very reason why it's needed. So many misconceptions still persist around what it means to be female in the workplace, and it's something that so many women experience on a regular basis. One major lesson that Wonder Woman has taught is that visibility — that is, actually putting a woman on screen as a superhero unapologetically — helps to push back against the myths.

Gadot had no obligation, of course, to be open about her pregnancy or to represent all pregnant women by doing so, and it'll likely be a long time before we actually see any pregnant superheroes on-screen. But instead of applauding the fact that she was able to hide her pregnancy so well, and commending that she was able to silently push through the very real struggles that so many women face, maybe it's time we stopped to question why it is that we'd ever expect anyone to do that in the first place.

More Like This
'Women Talking' Is A Powerful New Movie Based On A Book
10 Great Podcasts That Will Keep Your Kids Entertained On Your Next Family Road Trip
Sally Field Is The Ultimate Cool Mom Who Once Tried To Set Her Son Up With An Olympian
Marie Kondo Gives Up Tidying Post-Kids, Sparking Joy For Moms Everywhere
What Parents Are Talking About — Delivered Straight To Your Inbox