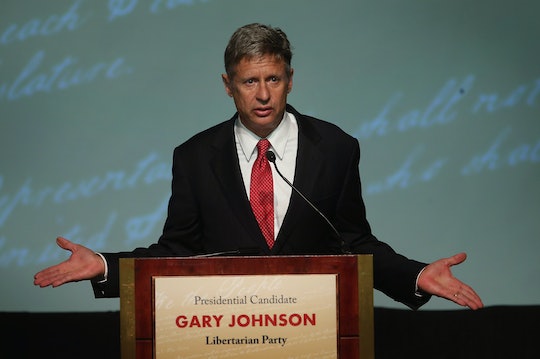 Why Gary Johnson Is Bad For Donald Trump's Campaign

The 2016 presidential race has largely been Democrat versus Republican. It seems the American people cannot go one day without hearing the words "Hillary Clinton" and "Donald Trump" splashed across media headlines with scandalous accusations or hilarious miscommunications. But between all of the insults and political gaffes floating around the political world at the moment, there is an important discussion circling, involving electorate grievances over the strict two-party system. Some feel as if, among the current field of candidates, neither are the right fit to be the next President of the United States. That's where Libertarian Gary Johnson comes in. But while his campaign might excite some, who prefer neither Trump nor Clinton, there's a good reason why Gary Johnson is bad for Donald Trump's campaign in particular — and a good reason Trump should watch his back when it comes to the third-party candidate.

Gary Johnson is coming right for Trump's jugular and could potentially be a better option for president for the scores of unhappy Republican voters who don't want relish the idea of a Trump presidency, but can't bring themselves to vote for Clinton. In other words, the 2016 Libertarian party nominee could provide voters with a way out.

While Johnson is not polling nearly as highly as Clinton or Trump, he is still on the map. According to a recent NBC poll, Clinton is polling at 39 percent, followed by Trump at 38 percent; Johnson comes in at 10 percent of the prospective vote. While this is no where near the lead, it's a promising sign, given how much time is still left in the game.

Johnson may be fiscally conservative, but he harbors no warm feelings towards Trump. During the Libertarian debate earlier this year, Johnson even shared an, um, interesting remark about Donald Trump:

If Donald Trump and Hillary are the nominees, if that is not an opportunity for the Libertarian party, then I don't know what is. I've climbed the seven summits, the highest mountain on each continent, and Donald Trump's a pu**y.

What an interesting and loaded statement.

Johnson is right about two things: 1) Now is definitely the best time for a third party candidate to prove to the American people that they are not Trump or Clinton, and that they're capable of much more, and 2) Johnson has indeed climbed to all of the tallest peaks on each continent (including climbing Mt. Everest with a broken leg). So. Checkmate, Trump.

Johnson's platform is traditionally Libertarian, which might turn off some, but could also resonate with a lot of Americans across the spectrum. In an interview with CNN, for example, Johnson stated that he does not believe in the death penalty or a federal minimum wage, and that he supports a woman's right to choose and wants to embrace immigration. Johnson also believes that states should not intervene with transgender issues. These are all very strong ideals, made even more clear on Johnson's website, that prove he could be the best alternative candidate, thus putting Trump's campaign in some serious trouble.

In fact, statistical analysis website FiveThirtyEight warns people to pay attention to Gary Johnson. While it is possible that he could not win a state during the presidential election, it is possible that he could make some noise and become a household name — further scaring both the Democratic and Republican presidential campaigns into complying with similar stances. For Hillary Clinton, given how similar some of their social views happen to be, this wouldn't be a momentous shift. But for Trump? That's a whole different story (especially given how seriously he's campaigned against immigration).

While no one knows yet what will happen in November, it's safe to assume that the the numbers and the public's opinion towards candidates will continue to change daily. Gary Johnson has the potential to cause a ripple in the presidential election, including and especially in Donald Trump's campaign — and that's guaranteed to bring plenty of fireworks.