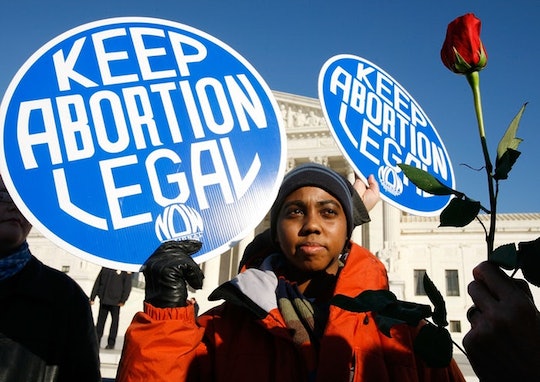 The fight to provide all Americans with adequate reproductive health care hit a disturbing road block Friday after the Georgia House passed a 6-week abortion ban called HB 481, aka the "Living Infants Fairness and Equality (LIFE) Act." The law is troubling for many reasons, especially since many women don't even know they're pregnant at six weeks. If you're alarmed as I am about this bill, here are a few you ways you can fight back.

In recents months, two anti-choice bills were introduced to the Georgia House: HB 546 and HB 481. HB 546, which is still active, aims to "criminalize abortion" in the event that Roe v. Wade is overturned, according to Planned Parenthood. And HB 481, which passed Friday, will "ban abortion once a fetal heartbeat has been detected; and recognize fetuses as natural persons who qualify for state income tax deductions and state population based determinations," according to Rewire.

Georgia Governor Brian B. Kemp addressed HB 481's passage Friday, stating, according to CBS News: "Georgia values life. We stand up for the innocent and speak for those who cannot speak for themselves. The legislature's bold action reaffirms our priorities and who we are as a state. I thank these lawmakers for their leadership and applaud their undeniable courage."

There's nothing courageous, however, about jeopardizing the reproductive health and safety of countless people.

“This is an all-out assault on the reproductive health and safety of Georgia women,” NARAL Pro-Choice Georgia State Director Laura Simmons said in part about the bill's consequences, according to a press release. “This cruel, unconstitutional bill is part of an extreme GOP agenda to strip freedoms from women and could not be further from the values that most Georgians hold. Nearly 7 in 10 Georgians support safe, legal access to abortion and reject government intrusion into private medical decisions."

What's most troubling about HB 481 is the stipulation that an abortion can't be performed once a fetal heartbeat is detected, which typically occurs at six weeks, according to Healthline. Many people don't know they're pregnant at six weeks, and it's important to note that "six weeks of pregnancy is just two weeks after the average woman misses her period," as Jackson Women's Health Organization Director Shannon Brewer previously noted in a statement to the Center for Reproductive Rights.

Past the heartbeat mark, an abortion in Georgia is permissible for only these three reasons, according to Rewire:

It's important to point out here that abortions performed at six weeks are safe and are crucial to reproductive health care. Heart beat bills, which have been introduced in states like Mississippi, Florida, and Kentucky, to name a few places, try to discredit these facts by presenting inaccurate information and using misleading language about abortion.

As for HB 546, which hasn't passed yet, it would "punish anyone who performs an abortion — including doctors, nurses, and physician assistants — with up to 10 years in prison and a fine of up to $100,000," according to the Intercept. In HB 556 passes alongside HB 481, it looks like Georgia will become the first state to ban abortions altogether.

That all being said, there are ways to prevent these threats from becoming a reality. One step you can take is to support actors and production companies who won't film movies and television shows in Georgia if Kemp signs the bill.

Actor Alyssa Milano headed the charge, writing in a tweet: "There are over 20 productions shooting in GA & the state just voted to strip women of their bodily autonomy. Hollywood! We should stop feeding GA economy."

Actors Seth Green, Ashley Judd, and David Arquette are just some of the famous names to sign a petition in support of Milano's cause.

Another option is to donate to the ACLU of Georgia, an organization that is prepared to sue if Kemp signs the bill, as is expected. Court battles aren't easy or cheap, so show your support in any way you can.

The bottom line? Heartbeat bills, like HB 481, are threats to the safety and reproductive health of women. If you believe that everyone deserves the right to adequate health care, then let your voice be heard in this pivotal fight.

More Like This
Elmo Talks About Getting His Covid Vaccine In A Cute New Video
Here’s How To Fight For Abortion Rights
This Map Illustrates Just How Many States Would Ban Abortion If Roe V. Wade Is Overturned
You Can Schedule Your Kid’s Covid Vaccine Appointment At Walmart