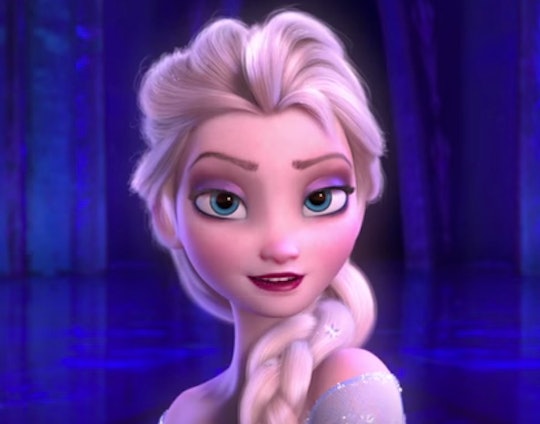 Why #GiveElsaAGirlfriend Is Important For Kids & Parents

The Internet is a powerful tool. It gives many people access to information instantly, it gives many individuals the opportunity to send messages with the push of a button, and it helps most stay connected. It give people a voice. And while that voice is often raw and beautiful, empathetic and supportive, sometimes that voice is judgmental. Sometimes it is a voice full of fear, anger, and hate. However, on Saturday, that voice became awe-inspiring when Alexis Isabel Moncada posted one simple but powerful tweet: "Dear @Disney, #GiveElsaAGirlfriend." The hashtag, which has gone viral, is obviously significant for the LGBT community, but #GiveElsaAGirlfriend is important for all kids and all adults. Because it is a sign that people are breaking away from conventional ideas about what makes a storybook relationship. And because it is forcing society to have a conversation. But what makes this hashtag so meaningful? Why is this conversation so damn critical?

Well, there are at least four reasons the #GiveElsaAGirlfriend movement is important (at least in my opinion). It helps to normalizes a still-taboo subject. It promotes confidence, acceptance, and love. It gives some children a character they can relate to —because representation is everything — and it asks Disney to take the lead. It pushes Disney to take a stand, and that is an important piece of the puzzle (and one people shouldn’t ignore). Why? Because the Walt Disney Company is a powerhouse. Its films reach millions — probably even billions — of men, women, and children each year, and this means the company is in a unique position. This means it has not only the ability and but the means to make a meaningful statement. And as Moncada explained herself, in a letter posted on MTV, it is long overdue:

Growing up, I never saw a princess fall in love with another princess—and neither have girls growing up right now. The entertainment industry has given us girls who have fallen in love with beasts, ogres who fall for humans, and even grown women who love bees. But we've never been able to see the purity in a queer relationship...[and] this is why Elsa [could be]...so much more than a poster image — for me and for every girl who has and will watch Frozen. Giving young girls the chance to understand that a princess can love another princess the same way Cinderella loved her Prince Charming is vital to their development. No one deserves to feel isolated and confused about who they are.

All we need is someone to show us that there are other options, other kinds of princesses, and other ways to have the happy ending that you deserve.

And Moncada is so right: Not only could a lesbian princess help young girls — especially those who find themselves struggling with their own identity — seeing such a couple onscreen (and in a family film) will help all children. Because it will help to normalize same-sex relationships. It will help remove the stigma associated with same-sex relationships (or at least make non-heteronormative relationships more visible), and it will help to make them OK. What’s more, it will force parents and grandparents to face their own prejudices because it will start conversations. Yes, kids will ask “why is Elsa kissing a girl?” but the only way to alleviate that question is to answer it: the more people address it and answer it, the less it will seem like something strange that requires a question.

Additionally, portraying relationships that aren't heteronormative will help kids with same-sex parents — and the same-sex parents themselves — be more representative in mainstream pop culture. Representation is critical to acceptance, discussion, and progress.

That said, it is no secret some people aren't a fan of Disney or other media companies' “princess tales.” Critics argue these kinds of films encourage young girls to be submissive. That "damsel in distress" films suggest women should change for men — and that women should look for love from strangers in a forrest — and I get that. I really do. However, there is another side to this argument, and perhaps Disney hasn't taught anyone terrible lessons; in many ways, the company has taught kids some of the greatest life lessons.

Mulan, though some say it perpetuates insensitive tropes about Asian people, also taught kids to be strong and independent. Beauty and the Beast remind kids that true beauty has nothing to do with their looks or their appearances, but with what is inside. Beauty is how you act, and how you treat others, and Cinderella reminds people that “no matter how your heart is grieving, if you keep on believing, the dream that you wish will come true.” Imagine what Disney could teach kids if Elsa "gets a girlfriend." Imagine the lessons people could learn — not from hate or judgement — but from a place of love. And love should be a critical theme of life outside of movies.