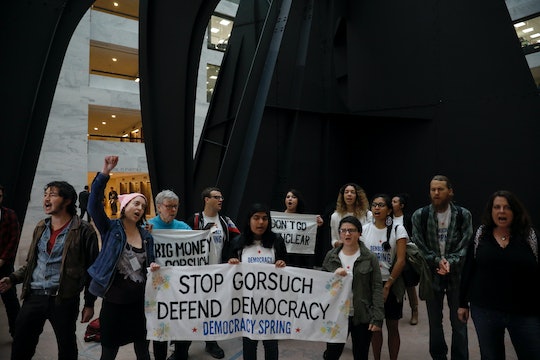 Why “Going Nuclear” On Gorsuch Is Such A Big Threat

On Thursday morning, Senate Republicans triggered the "nuclear option" to clear the path for Judge Neil Gorsuch's confirmation as Supreme Court justice. The move comes after a successful filibuster by Senate Democrats that blocked Gorsuch's nomination from moving forward. It's an exceptional — though not entirely unprecedented — move that the GOP itself once derided as "an abuse of power." So why is “going nuclear” on Gorsuch a such a threat to democratic processes in a way that it wasn't before? Because a lifetime seat is on the line.

In 2013, former Democratic Senate Majority Leader Harry Reid deployed the "nuclear option" to eliminate the filibuster for all nominations except ones for the Supreme Court, according to ThinkProgress. Reid used the tactic back then in response to what his party saw as "excessive Republican filibusters" against former President Barack Obama's nominees. At the time, then-Senate Minority Leader Mitch McConnell whined that Reid had broken the rules "to change the rules," ThinkProgress reported. Now, Senate Majority Leader McConnell has followed in Reid's footsteps.

Though not the first, what Senate Republicans have set into motion Thursday morning is unprecedented in its own right. It's the first time a Supreme Court nominee would be confirmed by a minority vote. And, as Bloomberg reports, that means future SCOTUS nominations will be able to advance in this way.

Why is that a big deal? Because a seat on the U.S. Supreme Court is a lifetime appointment. If Gorsuch is confirmed, he will stay on the SCOTUS bench until he dies or retires. The only other way to remove a Supreme Court judge is by impeachment, and that rarely happens. In fact, the only person to be impeached was Associate Justice Samuel Chase in 1805 — 212 years ago.

Rightfully, a Gorsuch confirmation worries Democrats. He's a pro-business, anti-choice judge that would tip the Supreme Court a little more to the right. According to Vox, it's not a big deal — that is, if all the rest of the justices stay put. Politicos believe Gorsuch will vote on cases in the same vein as late Supreme Court Justice Antonin Scalia, who's seat he would fill; though not optimal or wanted, it at least gives the country an idea of what to expect from Gorsuch. But three other justices may retire during President Donald Trump's term. That would give Trump the power to nominate other justices that align with his staunchly conservative worldview. With four Antonin Scalias on the bench, the U.S. Supreme Court would be firmly on the side of the GOP (which leans more Tea Party and state intervention than moderate, stay-out-of-people's-lives right now).

That, rightfully, scares progressives. A right-leaning high court could undo a whole host of civil rights at the federal level.

That would be unprecedented, yes, but not a surprise. After all, Republicans have shown time and time again that they'll obstruct democracy in an unprecedented way. Going nuclear on Thursday was not the first time the GOP has bent or broken the rules in order to force their agenda — and it certainly won't be there last. But changing the game in order to win is not how democracy works.

If nothing else, the fact that Senate Republicans triggered the "nuclear option" proves they have always been less concerned with upholding democracy. As Ilyse Hogue, president of NARAL Pro-Choice America, said in a statement,

Through this entire nomination process, Leader McConnell and the GOP knew that they didn't have the American people on their side. With today's rules change vote, they proved they do not care.

Let's hope this is not the beginning of the end.