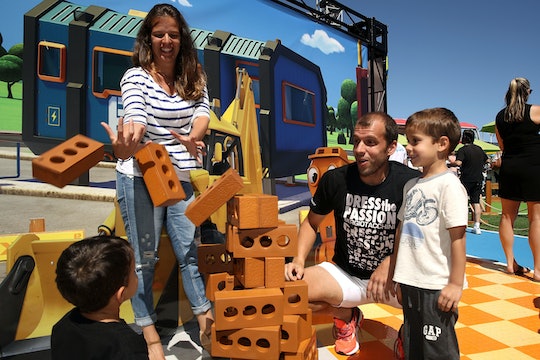 Why Having Kids Makes People Happy Or Fulfilled

My partner and I had talked about having a kid for a couple of years before I became pregnant. At the time, I didn't know if I could even have a kid. I have polycystic ovary syndrome, a chronic condition that compromises your fertility. But in late 2014, I found out I was three months pregnant; in May 2015, I had our son. Ever since I gave birth, I have experienced this amazing feeling of unbridled joy. But that shouldn't be a surprise since there are studies that show why having kids makes people happy or fulfilled.

Decades-old research has claimed that parenthood makes people sadder and less fulfilled. There's more responsibility, more work, and less time for self-care (all of which are undoubtedly true). But according to The Atlantic, a 2014 study found that kids do in fact bring joy to parents who've chosen to be raising children, be it through pregnancy, adoption, marriage, or some other way. Two years earlier, a study published in Psychological Science discovered that having children improves happiness, particularly among parents ages 26 to 62, the Deseret News reported.

In other words, parents aren't these tired, miserable people most of society portrays us to be.

These studies, of course, do not mean you should have children. There are many reasons why you couldn't or wouldn't want to have kids. All of those reasons are valid, even if it may not seem that way. And to be fair, there has been research that has shown the opposite; for example, a 2003 study published in the Journal of Marriage and Family found that unmarried parents are more depressed and less confident that non-parents. Another study published last year in the American Journal of Sociology affirmed these findings. (The researchers did note that the happiness gap between parents and non-parents "varies substantially from country to country"; in the United States, parents are less happy, but in Norway, parents are happier.)

But a report published in the Proceedings of the National Academy of Science journal in 2013 found "very little difference" in positive well-being between parents and non-parents. How could that be? According to the researchers, a parent's or non-parent's happiness is not contingent upon the existence or nonexistence of a child; instead, it depends on whether a person wanted to live child-free or wanted to have a child in the first place.

And whether you should raise a child is a deeply personal decision. Some parents may regret making that choice; some parents don't. Others may lie in that in-between place that says, "I love my child and he makes me happy, but damn it, I just want to pee in peace."

I know my son makes me happy and fulfilled. I know that my heart wants to burst with excitement every time I hear him laugh or when he says "thank you" while helping his dad put clothes in the dryer. But I also know I felt some type of happiness before I had him ("some type" because depression doesn't allow that much room for joy).

In the end, what these studies don't tell you is that, when you have a kid, you experience a different type of happiness. For some, it's bigger, more intense. For others, it feel like peace. For me, having a kid has stirred in me this deeply profound, heartbreaking kind of love. It's different from the love I have for his father or my family. It's different from the happiness I feel when I land a major byline or break a major story. Whether I am less or more happy than my childless best friend doesn't matter to me.