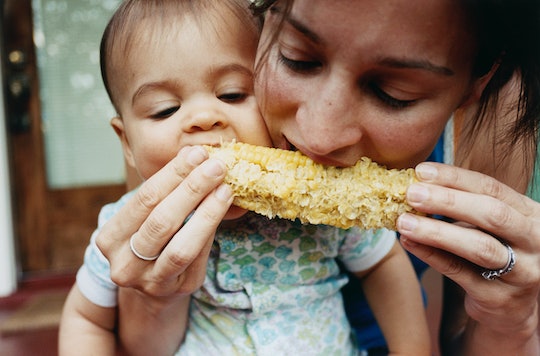 Why I Decided To Pump Less Breastmilk (Yes, Less)

Having “successfully” breastfed my child and returned to work, I am now actively trying to pump less. It’s not just because my 7-month-old daughter is going increasingly longer between meals, slowly starting to enjoy solid foods, and will eventually wean off milk altogether. It’s because, as a nursing working mother, I’m tired.

Flash back to a year ago: Five months pregnant, I was already starting to mentally prepare for breastfeeding. On the one hand, I had read that it was supposed to be this wonderfully natural thing – a symbiotic, bonding experience between mother and baby. And yet, most of what I heard nursing moms discussing were problems with the baby’s latch, under-supply, over-supply, clogged ducts, and cracked nipples.

“I’m not going to martyr myself for this,” I told my husband one afternoon. We agreed that if breastfeeding required too much self-sacrifice on my end, we’d feed our baby formula without remorse.

Then my daughter was born. And to my great surprise, I genuinely enjoyed breastfeeding. Sure, it was tiring to feed on-demand. And yes, I missed the days of being able to use the toilet without carrying a baby attached to my chest. I got mastitis twice and clogged ducts thrice. But I also savored the warmth of my daughter’s skin against mine and the symbolism of nourishing her with my own body.

It wasn’t just that my office lacked a lactation space (which it did), that my newest frenemy, the breast pump, felt soulless and cold compared to my warm, snuggly baby (also the case), or that there were approximately a million pump parts to clean and assemble multiple times a day (one million, give or take). It was that I suddenly had to deal with deadlines, deliverables, and co-workers. I missed my daughter, felt guilty for missing my daughter, and worked to be as productive as my pre-baby self, all while producing food for her every two to three hours. I tried to lean on others — my husband, family, friends — but with this particular task, it was hard. Producing breastmilk for my daughter was something only I could do, and this knowledge only made doing so more stressful.

Within a week of being back at work, my milk production nose-dived. Getting my supply to meet my daughter’s demand was a struggle: I’d pump 12 ounces during the day, and my daughter would drink 16. Each evening, I’d transfer bags of frozen milk (that I had pumped and stored during leave) into the fridge for the next day so that she would have enough to eat.

As weeks passed, this evening ritual started to chip away at me.

Maybe it’s time to use some formula, I’d think and my husband would echo the thought out loud. Rationally, I knew that my daughter would be fine with formula. I was raised on formula! And yet, those medical recommendations — the ones stating that babies should be exclusively breastfed for the first six months — kept ringing in my ears.

I thought of my mom friends who had supplemented with formula when they weren’t able to produce enough breastmilk. They had no choice, I thought.

The pump ... was supposed to let us to feed, work, and 'have it all.' But, as was the case for most moms I spoke with, being forced back to work too early while chained to a machine hardly felt like having it all.

But I had the choice — or at least, what felt like a choice. I could produce enough if I devoted myself to the task. I had an office job. By this point, I had gotten my workplace to build a lactation space. I had the privilege and flexibility to take breaks. I could also get up in the middle of the night to pump. I could pump before work, pump after work, pump before bed. I could pump, pump, pump — and slowly the ounces would add up.

If I can do it, then I should do it, I thought.

I remembered my earlier conversation with my husband. I had said I would not martyr myself. But what exactly had I meant by that? How much self-sacrifice was too much?

This self-talk was ironic: As a sociologist, I study how systems and structures impact individual experiences. But when I found myself struggling to exclusively breastfeed while holding down a full-time job, my first instinct was to blame myself and search for an individual solution. What was I doing wrong? What could I change?

But I was reminded that this problem was bigger than me when I spoke with other nursing working mothers, almost all of whom had faced similar challenges. Dread, frustration, annoyance — these were their feelings about pumping. Supposedly, the pump was designed to liberate and empower us. It was supposed to let us to feed, work, and “have it all.” But, as was the case for most moms I spoke with, being forced back to work too early while chained to a machine hardly felt like having it all.

This is because whether mothers do it in their cars, bathrooms, or wellness rooms with recliners and footstools, pumping is work — time-consuming, physically taxing, and psychologically draining work. It’s work that moms have to do atop their professions, generally without any recognition or appreciation of the additional demands it places on them.

So while my struggles with pumping have felt individual, I’m starting to wonder: Are they not simply a predictable result of a societal failure to really account for the lived experience of motherhood? In embracing pumping as a way to get new mothers back to work quickly, has society taken the burden of meeting mothers’ actual needs off of policymakers and employers and put them back on mothers' shoulders? We now supposedly have the tools to do it all, and when we don’t, it’s our own fault.

But I can think of clear structural solutions to my individual pumping problems. In a country that guarantees mothers zero days of paid leave, it’s hard to feel like our work growing the next generation is valued. Among other solutions, a reasonable paid family leave policy would be an important first step to recognizing that work. At six months, my daughter started trying solid foods. Over the coming months, her milk intake will lessen. By a year, she will be done breastfeeding, and I will no longer be using my own body to grow hers. Were mothers provided at least six to 12 months of paid leave, we could actually ease some of the early challenges of feeding and working.

I’m committed to fighting for these kinds of policy changes that will help all mothers. But as I fight, I’m also trying to remember this: My daughter will only be this young once, and I refuse to spend her first year of life constantly stressed about milk. I don’t want to miss her morning snuggles or pre-bedtime giggles because I’m worried about when I can hook myself back up to pump.

Above all, I don’t want to set a self-sacrificial example for her. My daughter won’t learn from me that motherhood means martyrdom or subverting one’s own happiness, needs, and wants at all costs. I want her to know that if I couldn’t find a way to exclusively breastfeed her, work a full-time job, and stay somewhat sane — all of which I’m expected to do — then it’s not because I failed her, but because society failed me.

Which is how I decided to change my approach.

By integrating some formula into my daughter’s diet and pumping a bit less, I’m turning a corner. Don’t get me wrong: I’m still exhausted and juggling a new reality of personal and professional demands. I still feel the societal pressure to use my own body to produce my daughter’s food, and a desire for the enjoyment I got from breastfeeding. But less pumping for me has meant less daily stress and more time to focus on the things I care about. I’m a better mother, daughter, wife, worker, and friend. But more than that, I’m starting to recognize myself again — not just in the many roles I assume, but as a human being with interests, ambition, desires, and a right to say how much I’m willing to sacrifice at any given moment for my family.