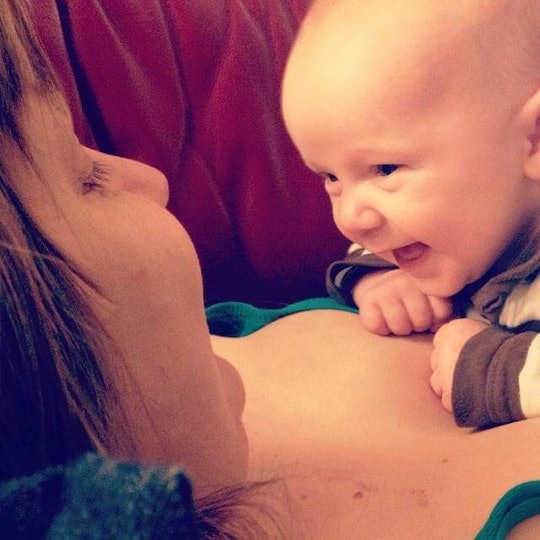 Why I Let Other Women Breastfeed My Baby

My oldest son sees breast milk as communal. I’ve tried to explain that not everyone has the same attitude towards breast milk and cross-nursing that we do, but I’ve been unsuccessful. He's 5, and in the span of his life he has nursed from other women, and he’s seen his 1-year-old brother do the same. He’s seen me nurse several babies who are not his brothers, and most recently, he saw me nurse my friend’s 9 month old, who was crying and needing comfort. Knowing what he needed, out came the boob, and he sniffed, seemed to shrug, and latched on. All with his mother's permission, of course. I've practiced cross-nursing, which means that I've let my friends breastfeed my babies, and I've breastfed theirs, too.

I have a special feeling about my friend’s 9 month old now. Before, I liked him; now, I love him. I pick him up and cuddle him whenever I can. Cross-nursing can do that. According to the WHO’s Global Strategy for Infant and Young Child Feeding, aside from breastfeeding, “milk from a healthy wet nurse” is the second choice for babies, behind only expressed milk from the infant’s own mother — and ahead of formula. This isn’t "hippie communism." It’s science.

I didn’t always feel this way about breast milk. I felt the way pretty much everyone does: it’s made by a mom, for her baby, and anything else is super gross. Those feelings changed when I had my oldest son and turned into an attachment parent. Cross-nursing was just the next child-rearing taboo, after breastfeeding and co-sleeping, babywearing and cloth diapering. It was what we’d have done if we lived in a communal society; once I was nursing my own baby, it just made sense. I didn’t think much about it, however, until my godson was born, four months after my oldest. His mother couldn’t sleep. She hadn’t slept for more than an hour in over a week. She was nearly weeping from exhaustion, and she feared sleep in case her son needed to eat.

“I’ll do it,” I said. I felt like a daredevil, like I was breaking that last taboo. She disappeared upstairs in sheer relief, and, eventually, my godson began to start looking around for some lunch. I felt almost dangerous as I opened my shirt and scooped up the baby. “I know I’m not your mama,” I said. But he sniffed, nuzzled, and latched on nonetheless. His nursing felt different from my son’s, more wave-like and less forceful.

Because my oldest had seen me nurse his best friend, he assumed breast milk was for everyone. While I was pregnant and my milk had dried up, he sidled up to nursing mothers and signed “Milk, milk, milk,” at them.

I nursed him on and off for four hours while his mother slept. My son watched. He didn’t seem jealous, though he was only a few months old, and someone else held him while I nursed my godson. But it did feel a little like pop one baby off, pop another on, repeat. I was a veritable milk machine. And everyone got enough.

I nursed my godson regularly after that. When his mother had an appointment, she left him with me. Occasionally I ended up with one baby on one breast and one baby on another, which involves basically stripping to the waist and drinking a lot of water. Once, my godson’s father drove him over for a "top-off" while his mother slept. I was his recognized dairy godmother.

Because my oldest had seen me nurse his best friend, he assumed breast milk was for everyone. While I was pregnant and my milk had dried up, he sidled up to nursing mothers and signed “Milk, milk, milk,” at them. All of them but my godson’s mother laughed it off. She latched him on.

I’m so grateful he had the chance to have milk when I couldn’t provide it, and that that milk came in tandem with his best friend.

His mother continued the favor when my second son was born. My oldest had nursed through my whole pregnancy, and still depended on milk for comfort and security. My godson’s mother, heroically, nursed two squirming 2 year olds at the same time while she waited for the chance to see our new addition. I’m so grateful he had the chance to have milk when I couldn’t provide it, and that that milk came in tandem with his best friend.

I've pumped for a few other babies in between, but it wasn’t the same, spending hours with a sucking machine; white liquid stashed in a freezer; a handoff; profuse “thank yous” from mothers who were just was doing their best to keep their babies on breast milk. I never felt the same connection to those children as I did to the ones I directly nursed.

I’d nurse any baby that needed it, and I’d hand my kids over to lactating friends if need be.

At one point, it was my youngest son and I who relied on others. I had an urgent appointment; the attachment-parenting friendly babysitter breastfed him when it ran over. I was grateful to know he could get the same comfort and nourishment when I wasn’t there to give it. In much the same way, my friend nursed my son when a different doctor’s appointment ran over. We couldn’t have given him formula — his numerous allergies prevent that — so it was boobs or nothing.

I’ve never had anyone — friends or strangers — strongly object to cross-nursing. I did get a few funny looks from family, and some questions about why we couldn’t just give the babies formula, but that was it. I never worried about the risks — AIDS, STDs, or drug use — because I knew the women nursing my kids. They were safe.

Looking back, I am still grateful those women stepped up and provided what my children needed when I couldn’t. Milk’s a precious commodity. For us, that commodity just happens to be communal. I’d nurse any baby that needed it, and I’d hand my kids over to lactating friends if need be. I’m lucky to live in a community like that. While Eats on Feets made the headlines with milk-sharing a few years ago, we’ve been doing it all along, baby by baby, mother by mother, like women have for thousands of years.