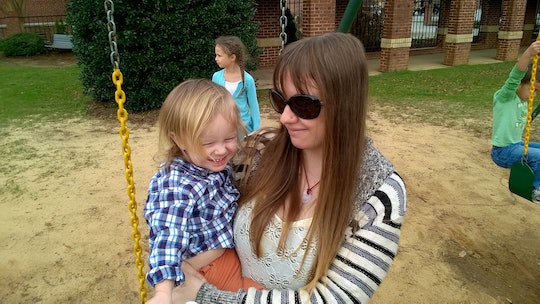 Why I Still Co-Sleep With My Toddler

Bedtime starts with a regular routine: The kids have dessert, they have a last drink, and then I put on my 2-year-old son’s nighttime diaper and his pajamas. My 4- and 6-year-old sons careen off to their shared bedroom to sleep together in the top bunk. They were sleeping like that by 16 months. I pick Sunny, my youngest, up off the changing table and carry him into my bed. I still co-sleep with my toddler and sometimes love it, sometimes hate it, but mostly, I just want it to end.

I arrange the pillows to one on the bottom to serve as a base, one on the top to rest my head, and one behind me to cushion my back. I yank the body pillow that keeps Sunny from falling out of bed. Then I pull up the covers: blanket, comforter, afghan. “Go to the spot where we nurse,” I tell Sunny, and he scurries over to the nest I’ve arranged. “Sweepy,” he says, cuddling in. “Want mam’ milk.” I lay down next to him. I bare my breast and he latches on. He feeds until he falls asleep. It could take two minutes or it could take 45.

To recap: Yes, my son is 2 years old. Yes, he sleeps in my bed. And yes, I nurse him to sleep at night. Sometimes I feel like no one else co-sleeps with a 2 year old, let alone nurses them to sleep. But I do. Sunny should've been night weaned, like his brothers were, months and months ago. Yet here we are. Sunny sleeps in my bed, and needs my breast to go to sleep. I deal with it.

This wasn’t intentional. Both of Sunny's brothers were both necessarily kicked out of our bed when I got pregnant, a feat I accomplished when each was about 15 months old. We used what we call The Daddy Method: I sleep in another room, and my husband gets them to bed in their room. The boys scream a lot, because they can’t nurse to sleep for the first time ever. My husband stays with them and then leaves when they finally pass out, and eventually they wander into our bed and get angry my boobs aren’t there. The cycle begins again: the screaming, the soothing. Sometimes my husband will bring in for a nip of milk in the room I'm sleeping in when they get too upset, but they’re never allowed to fall asleep on me. After a few days, they calm down. In two weeks, they’ve accepted the new routine.

But that never happened for Sunny. I just never got pregnant, and there never seemed a pressing reason to kick him out of our bed, to stop nursing to sleep. So we just kept doing it. And kept doing it. And now I have a 2-and-half year old who sleeps in my bed and nurses to sleep every night.

I mostly don’t mind. We have a giant sleeping arrangement, a queen bed side-carred onto a twin, so room isn’t an issue. I sleep on one end of the bed with my husband for most of the night. We keep two separate sets of bedcovers, one for the baby and one for us, so we really can ignore him. And I truly don’t mind nursing him to sleep. It’s cuddly and warm. I can play with my phone or read a book or get in some serious thinking time. I like nursing him, and don’t want him to wean, so dropping his favorite feeding seems a bad idea. All in all, I like having Sunny in the bed. That is, until he cries for me at 4 in the morning. Then I have to wake up, roll over, crawl under a second set of covers, and nurse him.

He needs me to nurse. And I'm slowly realizing that I'm not so willing anymore.

Because that’s the drawback to still co-sleeping and still nursing: Sunny isn’t night weaned. That means, in a nutshell, that he depends on the breast to go to sleep. If he rouses, if our puppy jumps on his head (the puppy sees him as another puppy and likes to sleep with him) — he needs to nurse again to go back down. He needs me to nurse. And I'm slowly realizing that I'm not so willing anymore.

Imagine it: I’m zonked out, dreaming, asleep in my husband’s arms, and I’m yanked out of this warm bliss first by whimpering, then full-fledged crying. I have to disentangle myself, roll over, and reinsert myself in the covers. As soon as I come within grabbing distance, Sunny is grabbing for me. I have to push him off to arrange myself, which makes him cry harder. Then I have to maneuver my breast out of a shirt and a nursing bra and insert it into his mouth. Then he shuts up. Then I have to get back to sleep.

Sometimes this happens easily. I drift back out, lulled by the warm covers and the nursing hormones and the general sleepiness. Sometimes I lay there for half an hour, just nursing, willing myself to fall asleep. Other times, Sunny’s restless. He kicks me. He pushes off my legs. He grabs my other nipple, and I have to hold a hand on my opposite breast to keep him from it. I fall into half-sleeps; he wakes me with a jab or a poke. Eventually, I say, “Be awake?” He says, “Awake!” and Sunny climbs out of bed and runs away. It may be 2 a.m. or 6 a.m. I stumble out after him, put on Octonauts or Daniel Tiger, and try not to fall asleep on the couch.

What Sunny really needs is to be out of my bed and in with his brothers.

I tell myself Sunny would night-wake regardless — his two older brothers both did — but because he’s next to me, kicking me in the belly and grabbing my boob, it seems that co-sleeping has something to do with his 3 a.m. party times. Sometimes I like getting him to sleep and sharing that special time spent nursing and breathing and cuddling together. But I'm sick of being pulled awake whenever my son wants. I'm tired of the middle-of-the-night nursing sessions, the kicking and grabbing and long work of slithering back to my husband. I'm very tired — literally — of the night wake-ups. Luckily, this morning it was only 5:30 a.m., not 3:30 a.m. or worse. I put on Scooby Doo. But what Sunny really needs is to be out of my bed and in with his brothers.

I’m ready to night wean and kick him out, at least until he wanders back in later. He’s old enough to let go. So am I. In the next few weeks, The Daddy Method will begin again, modified with me breastfeeding Sunny to sleep to start. He won’t like it at first, to be cut off night-nursing and stuck in his own bed. I’m ready for that. I’ll miss my baby, but I’m ready.