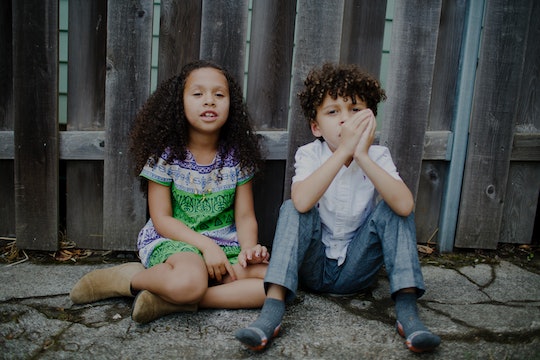 Why I Want My Biracial Kids To Identify As Black

Even though I know we all say this, I have the cutest children. Because they came from me and their dad. They're this perfect mix of both of us. From their eyes, to their noses, to their little limbs, down to the color of their skin. They also do this cute thing where, when they sing together, they harmonize perfectly. (Conveniently this also happens when they cry.) I've always thought that they were beautiful because they're my babies. But from the time I became pregnant until now, people have made sure to remind me that "mixed babies are the most beautiful!" And now, because my kids are old enough, people will go so far as to them how beautiful they are because they're mixed.

It makes me cringe.

When both kids were born, everyone was so curious about what they looked like, not who. When my son was born, he had sandy hair and grey eyes. People on Facebook "hoped" they'd turn blue, but I prayed they'd turn brown, like mine. When they did turn brown, Facebook was disappointed, as if his blue eyes would make him more white, less black.

Over the years I've stood idly by, watching my friends touch my daughter's hair, looking her straight in the eye and saying,

It's lucky that you didn't get your mom's hair. Your hair is so soft and beautiful.

When my daughter was 1-and-half years old, my ex-husband was pushing her in a stroller at the aquarium and I watched a woman go out of her way just to look at my daughter. Then she walked over to her husband and pointed at my child, as if she was something to be gawked at. A display. Then she said the words that had grown to make me sick: "Mixed children are always so beautiful!"

Biracial and mixed children exist in a space where they are two races at once, but aren't really one or the other. I grew up black and my children's father grew up white. I know my children will grow up with experiences closer to mine, in part because of where we live (Portland) and also because of how I am raising them. They hang in a delicate balance: both black and white, both the Same and Other.

My ex-husband doesn't always understand. He believes that they're white just as much as they're black, but I disagree. When we see Obama, do we see him as a mixed president or a white president, or do we see him as a black president? We see him as black, as we do with most children who are mixed with black and white. It's what I want for my kids: I want them to identify as black, because that's who they are.

We talk about race on a daily basis in our home. And we talk about skin color too. My children are growing up in a household with parents of different races, and it's allowed them an opportunity to talk about race and cultural and differences without awkwardness.

Most often, it's my daughter who notices how her skin color awards her different opportunities than other children. She comes home from school and says that children are really nice to her — that they admire her skin — while the boy in class who is black gets made fun of. She knows that her skin is different than mine. So she asks me what its like for me. She listens, a sponge soaking it all up, not speaking, just hearing. She grasps that with her whiteness comes a kind of privilege I (and the boy in her class) do not have. But she also understands the differences that come with being black.

If you ask my children if they're black, or if they're white, they'll tell you that they're "tan". They've fit themselves into a different box, one we can't check off on a form. They love that they're two different things at one time. Untouchable. Unique. When they see other mixed children, they're proud to see someone else who looks like them. In a place like Portland where most of the children they're surrounded by are white, they're overjoyed when they can see themselves in others.

Recently we were at McDonald's and there was an illustration on the wall by the soda machine. My daughter exclaimed,

Mom! This mommy is brown like you, and the dad is peach like dad, and this little boy is tan like me! I've never see this!

We hear adults talk about racial representation so often, but I don't think we hear children talk about it. When they do, we don't always listen.

My kids are growing up with a president who is both black and white. I am proud they have someone to look up to who looks like them, and I hope they know they can be anything they want to be. As a parent, I want my children to know that being biracial doesn't mean they can't be black, or that they aren't white. It's important to me that they know they are black. They are white.