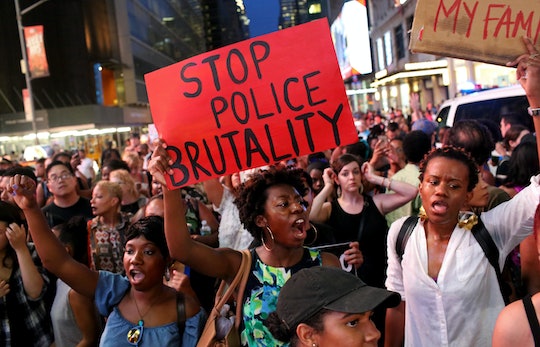 A remarkable photo of a young woman standing firmly and defiantly in a flowing black-and-white dress as she stares down armored policemen is now being regarded as an iconic symbol of resistance. Her stance is both nonthreatening and unapologetic. This calm confrontation with police happened while the 28-year-old mother was peacefully protesting against the police shootings of Alton Sterling and Philando Castile. Both men were killed in separate shootings last week. Moments after the photo was taken, the woman identified in the image, Ieshia Evans, was arrested. At a time when it feels like America is in shambles, it's important to understand why Ieshia Evans’ arrest photo is so important to the police brutality discussion.

Tensions over race relations, policing, and gun violence are at an absolute high right now and this now-viral photo stands as a powerful message to everyone of every race that these issues need to not only be discussed, but need to be addressed for the sake of peace, justice, and unity in the United States.

The photo of Evans — taken on Saturday by Reuters freelance photographer Jonathan Bachman — captured a moment of an everyday American woman during her first protest making a very a strong statement.

Evans is a mother to a young boy, works as a nurse, and, along with the majority of the nation, Evans was outraged by the recent police shootings of black men.

According to The Daily Mail, lifelong friend Natasha Haynes said Evans was "overcome with emotion" following the recent shootings and decided to take action and protest herself in one of the many demonstrations happening around the country because she "wanted a better future for her 5-year-old son."

Evans was one of more than 100 people who were arrested in Baton Rouge on Saturday, including prominent civil rights activist and figure for the Black Lives Matter movement DeRay McKesson.

Bachman, the photographer who captured the iconic shot, told The Atlantic about the moment the photo was taken and when Evans was arrested. He said:

"It happened quickly, but I could tell that she wasn’t going to move, and it seemed like she was making her stand. To me it seemed like: You’re going to have to come and get me... It wasn’t very violent. She didn’t say anything. She didn’t resist, and the police didn’t drag her off."

According to the Daily Mail, Evans spent 24 hours in jail and said the arrest was a “little rough, as was processing, while in jail a kind officer made sure all of the demonstrators were treated well.”

She didn't pose an obvious threat to police. She remained calm and peaceful, as did the protest, as she was arrested. In the photo, she exudes a type of determination, bravery, and unwavering strength that only a protective mother and an impassioned black woman could during such a monumental time in American history.

Yet, the symbolism behind the photo has face its own resistance after it was compared to the infamous photo of the unknown “Tank Man” taken during protests in Tiananmen Square in 1989, which shows a lone protester confronting a military tank. This comparison has faced some backlash on social media, some saying the situations were not the same:

The situations are indeed different, but there are similarities. It may be hard for some to realize the photo’s value because it’s still very fresh, however the photo of the woman in the sundress standing, alone, against policemen in full riot gear is emblematic to other historical photos of a single person peacefully and nonviolently resisting against heavily armed opposition.

Think of the protests in Ferguson not too long ago when a single protester threw back a tear gas canister down the road after police launched them towards a group of protesters. And in 1967 during the Vietnam war, a photo of a woman sticking a flower into the barrel of a gun during anti-war demonstrations. These photos showed a symbol of nonviolent resistance, just as the photo of Evans did. All of these photos stand for the same goal and all of them are iconic.

This photo is being hailed as iconic because it is. It will be a historic image and it will forever represent a message that's against police brutality and will be a symbol of resistance, just like other historical photos have done in similar discussions. Evans is not anti-cop because she confronted heavily armed policemen. Rather, this image stands as a message of peaceful objection to the way things have happened recently within law enforcement.

As protests and discussions continue around the nation, the symbolism of this photo of Evans should be used to address the severity and urgency that these issues pose to the United States. This photo is powerful not only because an everyday American woman and mother to young boy spoke volumes to a historic movement without saying a word, but, by doing so, she may have helped the nation come one step closer ending this recent spate of violence.