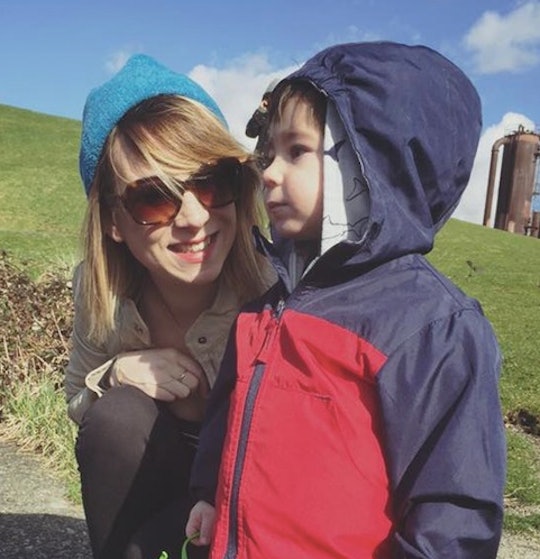 There are so many conversations I’m looking forward to sharing with my son; so many instances where I’ll sit across from him and look into his beautiful brown eyes and tell him about his mother and his father and the world we’re attempting to prepare him for. I plan to tell my son all about the day I met his dad: the tall, dark, handsome, bearded man at the end of a bar, waiting patiently for me with a whiskey in hand. I plan to talk to my son about sex, a topic many parents fear but one I’m anxious to discuss, so that my son can understand what it means to be sex positive and what consent is and why there are numerous responsibilities that come with being sexually active. I’m also going to tell my son I was abused as a child, because I believe that hiding my past from my son will only hurt his future — and my own.

I’m nervous, don’t get me wrong. My son has yet to turn 2 years old, cares mostly about Elmo and the Sesame Street gang, and gets upset when I can’t get his shoes on him quick enough for him to venture outside. He’s sweet and wide-eyed and innocent, and he’s not tainted by the darkness of abuse, or afraid that people will hurt him because, well, no one has yet. I don't want to be the one that scares my son or forces him look at me the way so many have before: like I’m broken and weak and incapable of taking care of myself. I don’t want my son to think that all grandparents are evil, all fathers are abusive, or that all women must come from broken homes. I don’t want to turn my son's exciting, adventurous, and otherwise carefree world into a scary, dangerous one. I don't want to end his innocence because of his maternal grandfather's mistake. But more than everything I don't want, I desperately want my son to know the truth about who I am.

I want to tell my son about what happened to me as a child because I want to be honest and informative and build a sense of trust between us. In my opinion, that can’t happen if I don’t let him know where I came from, what my life was like, and how growing up in an abusive, toxic environment shaped the woman, partner, and mother I am today. In order to know who I am, my son needs to understand where I came from. So I want to know that pain and disappointment and hurt are not the end of any story, especially my own. Oftentimes, they’re the beginning. I want him know and understand that it's never, ever OK to physically, emotionally, verbally, financially, or sexually abuse anyone — and justifiable reasons as why these things happen, don't exist. And I also need him to know that, for me, the tunnel of my abuse at the hands of my abuser did end, and I've had healthy, happy, and fulfilling life on the other side.

Dr. Linda Olson, who's worked for 30 years in the area of trauma, abuse, grief, divorce recovery, and childhood domestic violence, and specializes in post-traumatic stress disorder (PTSD), grief, and loss, told Romper that "living in denial and secrecy simply reinforces shame. And shame is the core wound of abuse. Shame is [saying] ''there is something wrong with me.'" I don’t want my son to think there is something wrong with his mother; something faulty in her bones or DNA or core; something that made it OK for someone she loved and trusted to hurt her. I don’t want my son to think that victims of any kind of abuse are somehow deserving of the treatment they’ve endured.

When I grow silent and reserved, and sink into myself as I fight off my PTSD and unforgiving memories, I want my son to know why, instead of being lost in a confusion that only creates more fear.

I want my son to know why sometimes (especially around Father’s Day or certain holidays) his mom gets sad. Dr. Olson, who holds a Master’s in Social Work, a Master of Arts in Clinical Psychology from the University of Iowa, and a Doctorate in Clinical Psychology from the Georgia School of Professional Psychology, Argosy University, Atlanta, suggests that all parents, “need to think about and understand that our children carry our pain (regardless if we talk about it or not) with them. In other words, children often perceive, and feel our pain (sadness, anger, rage, distrust, aloneness, hopelessness, resentment, fear, and shame) without us ever verbalizing any of it.” When I grow silent and reserved, and sink into myself as I fight off my PTSD and unforgiving memories, I want my son to know why, instead of being lost in a confusion that only creates more fear. “Children feel safe when we can acknowledge our pain vs minimize it or deny it,” says Dr. Olson, and my primary goal on any day, regardless of how difficult that day is for me, is to make sure my son feels safe.

I want to give my son the opportunity to ask questions, and have them answered. Dr. Olson says that,

A parent can best share their story without looking like a victim by not being defensive or having to prove themselves and by paying attention, being sensitive, listening to their child's reaction, [and] asking your child what she or he wants to know and hear, not assuming that we know how our children think or feel or what is too little or too much.

I want my son to learn about domestic violence in a factual way, shared by someone who understands the complexities of abuse. My story is just that: Mine. It is not my son’s to absorb as his own, it's not his burden to carry forward, and it's not his pain to internalize and digest. Dr. Olson suggests that parents share their abuse stories in a “matter of fact, non-defensive, non-judgmental way,” without attacking, blaming or shaming anyone. “Focus on the facts, just the facts.”

But most importantly, I want my son to hear about my abuse when he’s ready, which according to Dr. Olson, is at an age-appropriate time. “Too much information is just as overwhelming and scary for children as not enough information. Both extremes can create unnecessary fear and uncertainty in children.” So no matter how important that impending, future conversation is to me, I'll wait. I'll let my son obsess over Elmo and get upset about the laborious time it takes to put on his shoes, and I'll stare in wide-eyed wonder as he ventures out into a world he isn’t afraid of. I'll let him be a kid who doesn’t have to worry about pain and abuse and all-encompassing fear. I'll let my son be free and safe, because when I was his age, I wasn’t.

More Like This
Stepmom Quotes & Sayings For Every Occasion
17 Best Potty Training Products For Toddlers
From Captions To Gifts, These Are All The Kindergarten Graduation Ideas You Need
43 Instagram Captions For National Brother’s Day That Say It All